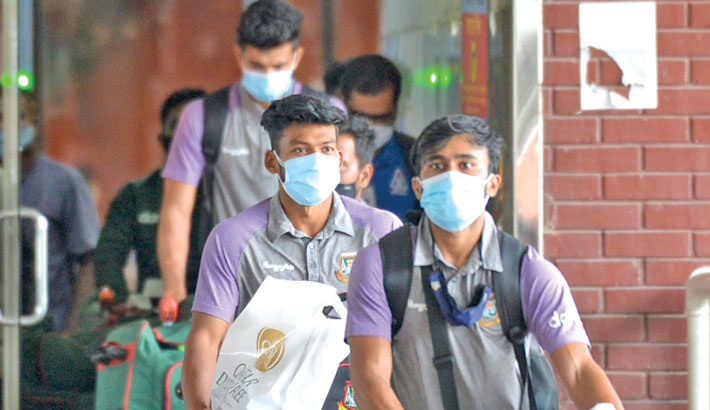 Cricketers Shadman Islam (right) and Najmul Hossain Shanto are coming out of the airport in the capital on Tuesday after winning solitary Test series against Zimbabwe. — BCB PHOTO

Six members of the Bangladesh Test team returned home from Zimbabwe on Tuesday after clinching their maiden Test series victory over the hosts.

Bangladesh opener Shadman Islam said that they have decided to dedicate this win to Mahmudullah, who had decided to quit Test cricket.

Mahmudullah is yet to confirm it officially but it was reported that he had informed his teammates about his decision on the third day’s play and the cricketers had given him guard of honour on the last day of the Test match.

“We didn’t know that he will be retiring and when we heard from (Mahmudullah) Riyad bhai that this was to be his last Test, we got very motivated to do well in the Test. We were all upset. He has done a lot for the team. We wanted to win the match for him. We all decided to dedicate the win for Riyad bhai, and thankfully that’s what happened,” Shadman told reporters, who scored his maiden Test hundred against Zimbabwe to do his part of the bargain.

“I will always cherish this century and every batsman has a dream to score a ton and I was taking such kind of preparation and was hoping that someday it (Test century) will happen,” he said.

“I had given my best, that’s why I could have the century, and it had benefited the team as well. It feels good to bring a victory to the country,” he said.

The three ODIs are scheduled on July 16, 18 and 20 respectively in Harare while the three T20Is will be played respectively on July 23, 25 and 27 at the same venue.