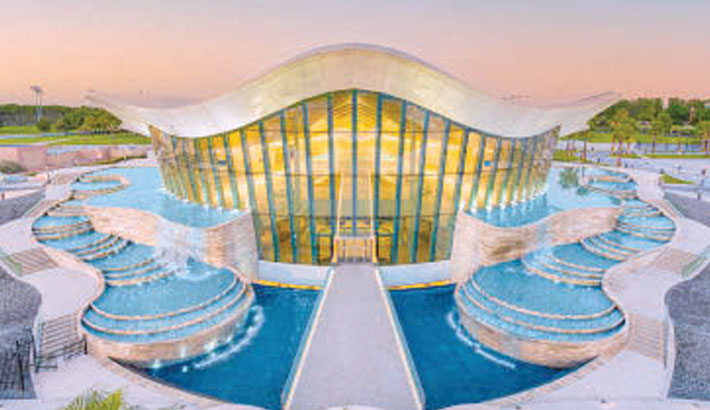 With a staggering depth of 60 meters (196 feet), the pool, part of the new Deep Dive Dubai attraction—has stolen the record from Poland’s Deepspot, which has a depth of over 45 meters. The Deep Dive Dubai pool is filled with 14 million liters of fresh water—the volume of six Olympic-sized swimming pools—and is at least four times bigger than any other diving pool in the world. Guinness awarded it the “Deepest swimming pool for diving” title on June 27.

The facility is open by invitation only for now but will open to the public later this year. The crown prince of Dubai Sheikh Hamdan bin Mohammed bin Rashid Al Maktoum, a keen diver, was one of the first visitors and shared his experience on social media.

Water temperature is maintained at 30 degrees Celsius (86 degrees Fahrenheit), a comfortable temperature for wearing a thin wetsuit or a swimsuit.

The indoor pool is housed inside a 1,500-square-meter oyster-shaped structure, a nod to the United Arab Emirates’ history as a pearl diving nation.

But the biggest star of Deep Dive Dubai is arguably the pool’s underwater city. Divers can explore “abandoned” sunken city apartments and play underwater pool in the arcade. State-of-the-art lighting and sound systems have been fitted inside the pool to create different atmospheres.

The pool also doubles as an underwater film studio—the largest of its kind in the region. A media editing room is available nearby in the facility.

Deep Dive Dubai offers courses for both diving beginners and certified divers. Divers can also explore the pool and the underwater city by themselves after a tour with one of the dive guides at the site.

Some 56 cameras have been installed around the pool to ensure the safety of divers at every corner.

It also has the region’s most advanced hyperbaric chamber—with a capacity of 12 people—in case of an emergency.

“There are quite a few dive pools in the world that are deep, but this one is so much more interesting,” Deep Dive Dubai director Jarrod Jablonski told CNN. “It’s not only deepest and largest, but the sunken city effect makes it next world order.

“There are so many things it’s really not fair to call it a pool.”

The diving complex also has a restaurant equipped with large windows and TV screens, allowing non-diving families and friends to watch from dry land.

And in case you forget just how deep the pool is, Deep Dive Dubai has posted a notice on its website for those planning to visit the city’s famed Burj Khalifa afterward.

“Don’t visit the top of the skyscraper after diving,” it says.

“After any dive, it’s recommended to wait 18-24 hours before ascending higher than 300 meters (1,000 feet). However, there is no risk in diving after having visited the tallest building in the world.”