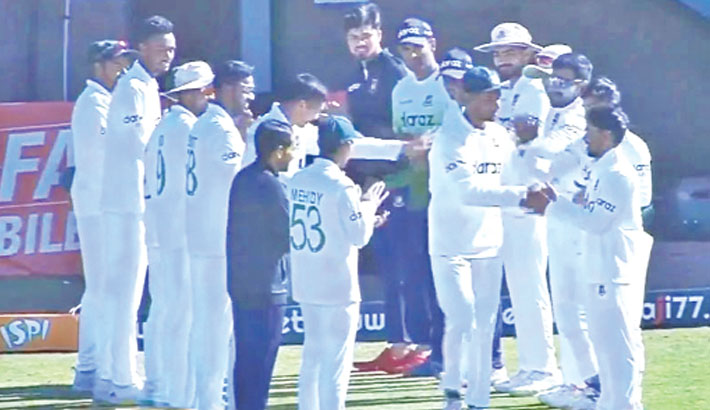 Bangladesh all-rounder Mahmudullah receives a guard of honour from his teammates at Harare Sports Club on Sunday. – COLLECTED PHOTO

Bangladesh all-rounder Mahmudullah continued to play hide and seek on his Test retirement despite receiving a guard of honour from his teammates in Harare ahead of the final day’s play on Sunday.

Usually, a cricketer gets a guard of honour when he decides to call it a day in cricket and everyone was expecting that Mahmudullah would make an official statement about his retirement after the Test.

To everyone’s utter surprise neither he was asked in the post-match presentation on the matter nor could BCB confirm the development to the media.

It is understood that BCB has requested the all-rounder not to speak with the media in this regard during the series considering he’s part of the ODI squad and will also lead the T20 squad.

He was also offered to change his decision and sit with the board and even BCB said they are ready to offer him a farewell game, which was learnt to be declined by Mahmudullah.

The request and offer were made after many felt inside the board room that he had retired from Test due to his differences with head coach Russell Domingo, who had thrown him out from red-ball cricket after the series against Pakistan in 2020.

Mahmudullah was only recalled for the series against Zimbabwe after two senior cricketers - Tamim Iqbal and Mushfiqur Rahim- received injury scares ahead of the tour.

The 35-year old made a superb comeback knock of unbeaten 150 runs to help the Tigers beat Zimbabwe by 220 runs to earn their first series win in Zimbabwean soil.

Mahmudullah, who was adjudged player of the match, also didn’t make any official comment on the matter while receiving the award after the match but he said that he was happy to bring a smile to the faces of his Test teammates.

“If we play international cricket, there will be pressure. I tried to stick to my strengths, I tried to be as simple as I could,’’ Mahmudullah said in the post-match presentation.

Test skipper Mominul Haque, who was amongst the cricketers to give Mahmudullah a guard of honour, later in the day surprisingly claimed that he wasn’t aware of the development which brought another twist in the tale.

“It’s his personal decision. I’m not aware of that,” Mominul said in a virtual press conference.