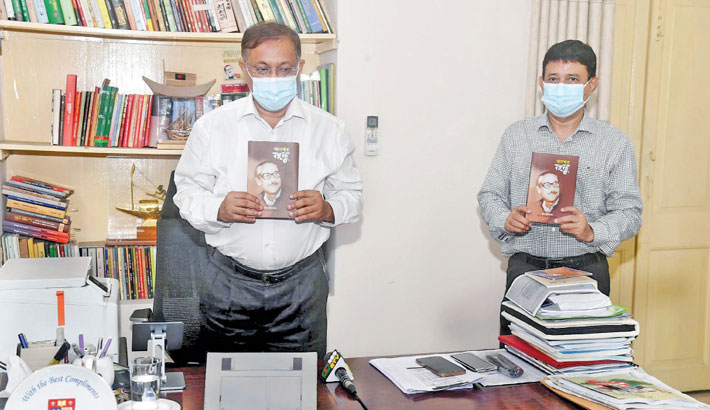 Information and Broadcasting Minister Dr Hasan Mahmud along with Principal Information Officer Surath Kumar Sarker holds the copy of a book titled ‘Anashwar Bangabandhu’ after unveiling the book at a programme at his official residence in the city’s Minto Road on Wednesday, marking the birth centenary of Father of the Nation Bangabandhu Sheikh Mujibur Rahman. —SUN PHOTO

Information and Broadcasting Minister Dr Hasan Mahmud on Wednesday said mass media in Bangladesh enjoy the optimum freedom and a vast revolution has taken place in this sector in the last 12 and a half years, reports BSS.

“Mass media are enjoying more freedom in Bangladesh than in many other countries across the globe and the country (Bangladesh) is a role model before many developing nations,” he said while uncovering the book ‘Anashwar Bangabandhu’ virtually from his official residence in city’s Minto Road.

The minister said selling or publishing a statement in the name of a human rights organization is not conducive to the promotion of human rights but goes against the protection of it (human rights).

He said the mass media in Bangladesh are enjoying more freedom than in many developing countries across the globe. “The publication of 167-year old newspaper ‘News of the World’ was shut down for publishing wrong information in the United Kingdom. The executive officers of the BBC were forced to resign for broadcasting wrong information about a representative of the House of Commons. But, there is no such instance in Bangladesh,” he said.

Hasan extended thanks to PID for publishing the book and said it (book) would help the new generation know Bangabandhu and the history of Bangladesh.

Murad, in his speech, said all should know Bangabandhu if they want to know the identity of Bangalee nationalism.

Mokbul said Bangabandhu is the dreamer of the Bangalee nation.