Finland rallies to save endangered seals 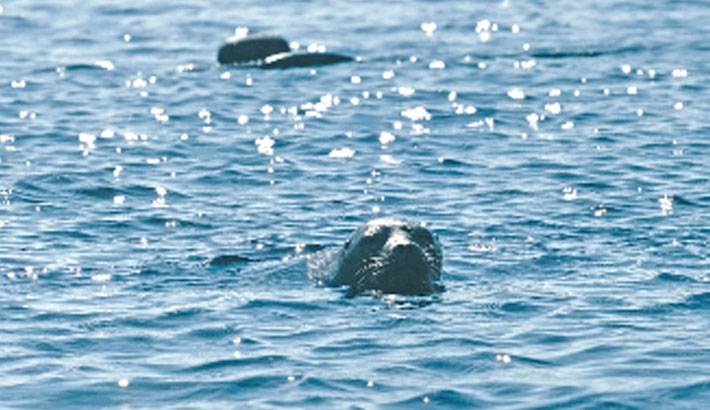 The serene, icy waters of Finland’s Lake Saimaa are a boon to fishermen and tourists, but their presence also threatens one of the world’s rarest and most endangered seals.

Out on Saimaa, a dark grey, whiskered creature pops its head up and breaks the surface in Finland’s lake district, close to the Russian border.

“That’s Eeva, she’s not swimming away because we’ve known each other for almost 30 years,” smiles Risto Eronen,  a retiree who since childhood has closely watched the seals, which are found only in the lake’s fresh water.

“She’s the old lady of Saimaa and has given birth to 10 pups in her life,” he tells AFP in his boat just metres away.

The population of ‘saimaannorppa’, as the mammal is called in Finnish, reached 400 this year—four times more than in the 1980s when it was expected to die out completely.

But this is still nowhere near enough to ensure the subspecies’ survival, campaigners say.

“The mild winters caused by climate change have made their lives harder,” as the seals need ice and snow to build their breeding lairs, Kaarina Tiainen from the Finnish Association for Nature Conservation (SLL) explains.

But the most acute danger for the seal, according to campaigners, is fishing for vendace, a small whitefish and a summertime delicacy—with four to eight seal pups dying annually, caught in the nets.

By mid-June, the seals have all left their rocky breeding spots for the depths of the lake, except for Eeva, who prefers the surface and is recognisable by her unusual bark.

“Most likely it’s because of a fishing hook in her throat,” Eronen says.

“She got caught on a line and that same spring-time started making heavy wheezing sounds” and spending longer on the surface taking in oxygen.

Most of Saimaa’s 4,400 square kilometres were covered by net-fishing restrictions, but the government declined to renew them at the end of June, preferring voluntary arrangements.

Curbs on net fishing have generated impassioned resistance in the tourist hotspot dotted with 50,000 summer cottages and which attracted over a million overnight stays a year before the pandemic .

“Fishing for vendace with nets is a way of life for many here,” says Teemu Himanen, whose local association issued 980 net fishing licences last year for just one part of Saimaa.

“People are chomping at the bit to be able to start net-fishing again in July,” he says, adding that many feel the threat to the seals is overstated.

“If the net is properly anchored to the bottom, the seal can easily avoid getting caught in it, even if it eats the fish out of it.”

To compensate for the end of the net ban, the SLL and volunteers have been constructing 100 seal-safe fish traps with green wire mesh, to distribute free of charge.

On a June Saturday morning in the village of Koikkala, 100 male and female fishing enthusiasts queue at a tent to sign a declaration that they will give up net fishing, before being given a free trap.

The popularity of the initiative is a sign that “the desire to protect the ringed seal has been rising sharply” in recent years, conservationist Tiainen says.

Himanen welcomes the move, but adds: “I don’t believe you’ll ever fully get rid of nets on Saimaa.

“You just can’t catch the same numbers in a trap.”

This year Finnish authorities submitted a bid for the habitats of the Saimaa ringed seal—distinguishable by distinctive white circles on its fur—to be added to the UNESCO World Heritage List.

The subspecies is already classed as ‘endangered’ by Finnish and EU authorities, and polls show a majority of Finns support tighter legislation to protect the animals.

As the plight of the seal gains more attention, “more people want to come to the region to see the animals themselves, so there’s a constant balancing act,” Tiainen admits.

And as saimaannorppa numbers grow, the question arises of when to relax protective measures.

“When there were only 300 seals they said we need controls on nets to get the number up to 400. But now we’re past 400 and that conversation still hasn’t stopped,” Himanen notes.

The government wants to reach “an appropriate level of protection” without setting a figure, yet for campaigners the population will need to be at least a thousand or two before protections can be loosened.

“But we may never be in a situation where it isn’t in some way threatened and needing protection,” says Tiainen.