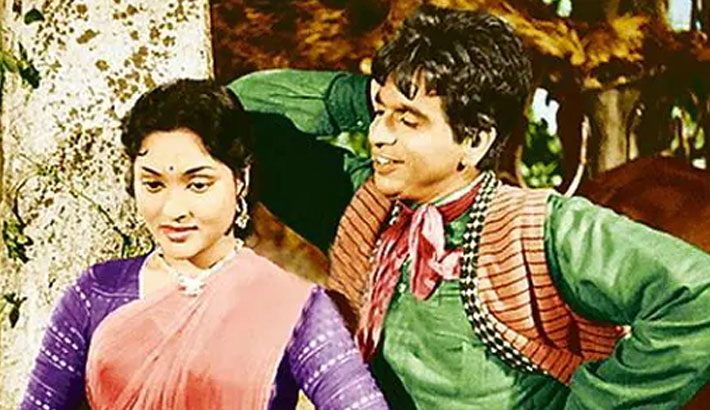 Bollywood legend Dilip Kumar, feted largely as Hindi cinema’s 'Tragedy King', enjoyed stardom that was buoyed by more than just that image. Among many facets that define his legendary status are the songs filmed on him. The 1950s and 1960s were considered the golden era of Hindi film music.

Writing about Dilip Kumar's memorable songs in Hindi films could fill up an entire book. News agency IANS pick up a few that would take you down memory lane, to the time when the Bollywood thespian reigned the silver screen with his charm.

‘Dil Tadap Tadap Ke’:The song is from the film 'Madhumati', which released in 1958 and features Dilip Kumar alongside Vyajanthimala.

‘Suhana Safar Aur Yeh Mausam Haseen’: The song was from the 1958 film 'Madhumati' and was picturised on Dilip Kumar. The song was written by Salil Choudhury and sung by Mukesh.

‘Madhuban Mein Radhika’: The endearing composition is from the 1960 film 'Kohinoor'. It defines the musical image of Dilip Kumar -- composed by Naushad and voiced by Rafi.

‘Tere Husn Ki Kya Tareef Karun’: One of the most romantic songs from the 1960s, the song was from the film 'Leader', which released in 1964. The film featured Dilip Kumar opposite Vyjayanthimala.

The song featured in the 1974 film 'Sagina', and is a rare number recorded for Dilip Kumar in the voice of Kishore Kumar. The music is composed by SD Burman, and the film stars Dilip Kumar with his wife Saira Banu and Aparna Sen.

‘Nain Lad Gayi Hai’: The song was from the 1961 superhit 'Gunga Jumna', produced by Dilip Kumar himself and directed by Nitin Bose.

‘Imli Ka Boota’: The popular number is from the film 'Saudagar', which released in 1991.