Movement of small vehicles increases on roads in capital 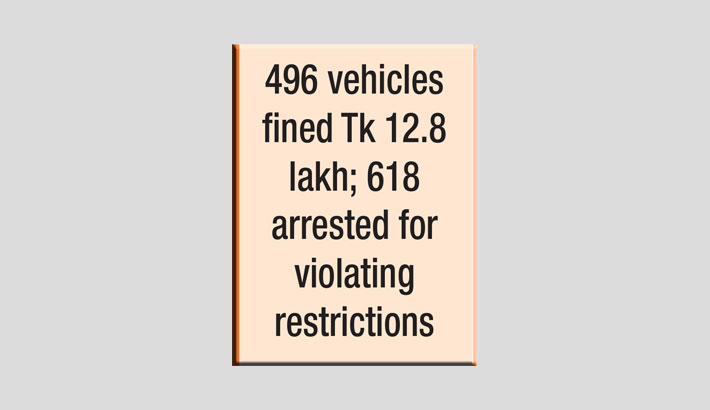 Movement of small vehicles, including private cars, microbuses and motorbikes, increased on the streets in the capital on Sunday, the fourth day of the countrywide weeklong strict lockdown.

The movement of people as well as vehicles was comparatively more on the city streets on the day than the last three days’ lockdown.

Simultaneously, law enforcers, including police, RAB, army and BGB men, are working hard to stop the rush towards streets.

Police said many people are trying to come out of their houses and gather on the roads with lame excuses.

Cases are being filed against motorcycles carrying more than one person, police said.

Rickshaws have also been discouraged from taking more than one passenger at a time.

Private cars are being questioned before being allowed to pass. The presence of law enforcers has had some effect on the city’s main thoroughfares, where traffic is relatively light.

But there are more vehicles on roads in Paltan, Malibagh, Azimpur, Mirpur, Dhanmondi and Shahbagh than in the past few days.

Most are cars and rickshaws, with fewer motorcycles on the road than usual.

Rickshaws are also taking advantage of the situation to operate on roads usually closed to them.

At least 618 people were arrested from Dhaka streets on Sunday on charge of defying Covid-19 restrictions and health guidelines.

With them, over 2,000 people have been arrested so far.

Besides, traffic division of the DMP on Sunday fined 496 vehicles Tk 1,281,000 for violating Covid-19 restrictions.

On Saturday, a total of 621 people were arrested from the capital and 346 people were fined Tk 106,450 for disobeying government orders during a joint operation of 8 divisions of the Dhaka Metropolitan Police.

Also, the RAB’s executive magistrates conducted 31 mobile courts operation across the country and fined 277 people around Tk 2 lakh across the country for violating the ban on the same day. According to the RAB headquarters, the elite force is in the field all over the country to enforce the ongoing restrictions and increase public awareness

In case of emergency, one must wear a mask and maintain the social distancing while going outside.

The government declared a week-long strict lockdown across the country to tackle the spread of coronavirus from July 1.