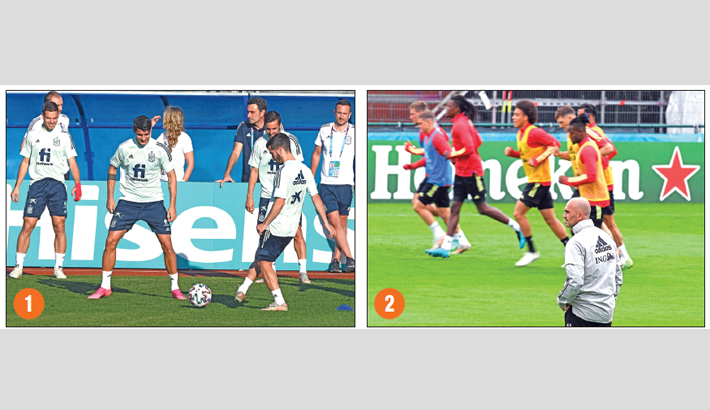 Belgium are anxiously waiting on the fitness of stars Kevin De Bruyne and Eden Hazard for their Euro 2020 quarter-final showdown against Italy on Friday, reports AFP.

Thorgan Hazard fired Belgium into the last eight with the goal that knocked out holders Portugal, but the fitness of his brother Eden and De Bruyne is Belgium's main concern before facing the Azzurri in Munich.

De Bruyne came off early in the second half against Portugal with an ankle knock, while Belgian captain Hazard injured a hamstring late in the game.

Neither trained on Thursday with Belgium's medical staff working around the clock to get them fit to face Italy.

Coach Roberto Martinez admits neither player will probably be 100 percent in Munich, "but we will use every day to get them as fit as possible".

Manchester City midfielder De Bruyne is central to Belgium's hopes of reaching the semi-finals, where Spain or Switzerland would await next Tuesday.

With four wins and three clean sheets so far at Euro 2020, the Belgians are living up to their billing as the world's top-ranked team.

However, Italy are on a national record run of 31 games unbeaten after digging deep to seal a 2-1 victory over Austria following extra time in the last 16.

Second-half replacements Federico Chelsea and Matteo Pessina scored to send the Italians through.

"Italy will be the toughest opponent we've met so far," said Belgium forward Thorgan Hazard. "They've had a good run of wins and it will be a nice challenge for us to end that sequence."

Italy forward Ciro Immobile has answered critics' claims he only scores in the blue of Lazio, not the national team, with goals against Switzerland and Turkey in the group stage.

Failure to qualify for the 2018 World Cup was "a lesson for us that will hopefully help us to go far in this European Championship and write over the ugly memories," said Immobile.

Meanwhile, Switzerland will try to follow up their shock elimination of world champions France at Euro 2020 against Spain on Friday after reaching the quarter-finals of a major tournament for the first time in 67 years. Vladimir Petkovic's side recovered from two goals down to force extra time against much-fancied France and prevailed on penalties as 2018 World Cup hero Kylian Mbappe missed the decisive spot-kick.

Now the Swiss hope to spring another surprise against a Spain team that has scored 10 times in two games after a slow start to the group stage.

Alvaro Morata's redemptive strike helped secure a 5-3 extra-time win over Croatia, but Spain will need to cut out the errors if they are to contend for a record fourth European Championship. History is on Spain's side against Switzerland, having lost just once in 22 meetings, a 1-0 defeat in South Africa that sparked their run to the 2010 World Cup title.

Sergio Busquets, the Spain captain, is the lone survivor from that team, while the Barcelona midfielder and Jordi Alba are the only two players in the squad left from their Euro 2012 triumph.