100 years of DU: The life and times of a premier institution 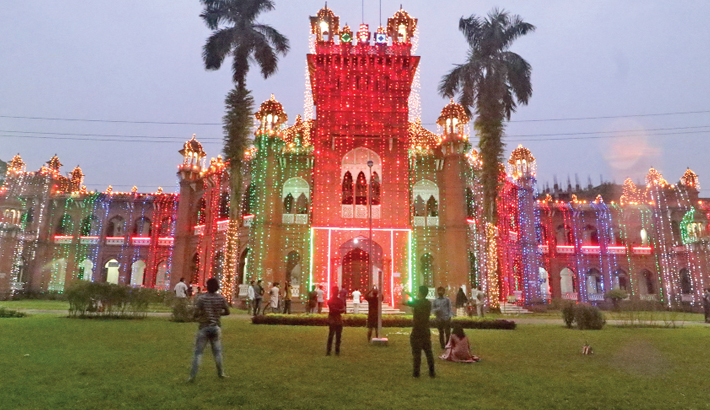 The Curzon Hall of Dhaka University has been decked out with multi-coloured lights, marking the centenary of the establishment of the university on Thursday. —Md Nasir Uddin

Once dubbed, rather erroneously, as the ‘Oxford of the East’ - Dhaka University completes a century as the country’s premier institute of higher education, with a proud and diverse history that many say it is failing to live up to, or even honour today. Dire allegations of academic decline and politicisation continue to dog the university as it passes this special milestone, reports UNB.

The centennial may be as good an occasion as any to address the misunderstanding over the Oxford comparison. As is often the case, the source of the confusion is a kernel of truth. The fact is that Lord Curzon, viceroy of India (1899-1905), did indeed plan to build for the people of India several ‘Oxfords of the East’.

What he meant was a university system modelled on the residential colleges of the University of Oxford (and even Cambridge for that matter, only Curzon may just have been biased as a graduate of Balliol College, Oxford). And this system was in fact followed in a number of Indian universities set up under the British Raj - another famous example being the Aligarh Muslim University - it too has been known to tout itself at times as the Oxford of the East. The University of Pune (formerly Poona) is another.

And so at the beginning a distinctive feature of DU was its non-affiliating, residential character like that of Oxford. However, since 1947 the University was given an affiliating mandate in place of an exclusive residential-cum-teaching character. That should have been the end of that. But the moniker stuck, often to the utter bewilderment of later generations.

DU’s journey a hundred years ago started with only three faculties, 12 departments, three dormitories, 60 teachers and 877 students on a 600-acre area of land. Today it has blossomed into a giant educational and political powerhouse in all aspects, intrinsically tied to the birth of a nation. Even Oxford, which is only 925 years old, may not be able to claim that.

At its 100th founding anniversary, DU now has 13 faculties, 83 departments, 12 institutes, 20 residential halls, 3 hostels, and more than 56 research centres. The number of current students and teachers has grown to about 37,018 and 1,992 respectively, according to the university’s own website.

Dhaka University, however, had the reputation of producing quality graduates in various fields and and an even greater one for leading the nation through major political movements on behalf of the masses, starting from the Language Movement of 1952, the non-cooperation movement of 1966, the uprising of 1969 - all wrought against the form of imperial rule exercised in the then-East Pakistan by West Pakistani political elites.

As a hive of dissident activism and subversive political uprisings, it was the very opposite of Oxford - a citadel for British imperial might in its heyday, where the statues of men like Sir Cecil Rhodes, of Rhodesia fame (or infamy), still stand today.

On March 2, 1971, the students of DU hoisted the flag of independent Bangladesh for the first time on the campus and handed it over to the political leadership of the country. The role of DU was instrumental in the birth of Bangladesh.

Then came the Liberation War, where DU students participated in droves, while a number of teachers provided the intellectual edifice of fighting for freedom. It all prompted macabre bouts of targeted intellectual killings by the Pakistan army, even as it stared at defeat square in the face.

The Pakistan army conducted one of the worst genocides in history at DU by murdering many intellectuals and students in order to break the political will of the nation. Suffice it to say, no institute even comes close to DU when it comes to having sacrificed its best and brightest for the nation.

Perhaps its last great stand of conscience was the concerted movement by students throughout the Eighties, with DU very much in the lead, that resulted in the fall of the autocratic government of H.M. Ershad in 1990, paving the way for democratic reforms. It is perhaps telling that in terms of quantity, such emancipatory movements germinating on DU’s grounds probably outweighs the number of widely-cited academic papers by DU researchers.

Experts, students and alumni of the university all agree that the quality of education has suffered drastically over the decades.

In terms of global university rankings, like the recently published well-recognized Quacquarelli Symonds (QS) World University Ranking 2022, DU has remained in an unchanged position as in previous years, at the 801-1000 range. That is, towards the bottom. No university ranking in the world awards any points at all for emancipatory activities.

The university currently spends a big portion of its budget for the salaries and wages of officials and teachers. Recently DU has proposed a Tk832 crore budget for the 2021-22 fiscal year, with only 1.32% (Tk11 crore) for research - a persistent bane that does its ranking no favours.

DU Vice-Chancellor Prof Md Akhtaruzzaman said: “It is a matter of pride that we are celebrating the 100th founding anniversary of DU. There are many things to do in future to achieve a greater place overcoming all the insufficiencies of the present.”

The DU authorities will arrange a virtual discussion program on the 100th founding anniversary of the university owing to the pandemic.

The virtual discussion will start at 4pm on Thursday, with VC Dr Md Akhtaruzzaman in the chair. Language Movement hero and Columnist Abdul Gaffar Choudhury will present the keynote speech on “Centenary of Dhaka University: Looking Back” as chief guest in the discussion.

Prof Akhtaruzzaman said, “Our university stepped into hundred years of it’s anniversary, with the pride of building the nation. We are moving forward to a prosperous future with the norms of progressive, democratic, human values. Now,  we promise to modernise the quality of education and research.”

Perhaps therein lies the central contradiction: in its institutional memory, DU has always been a force for disruption, a haven for dissidents, and it bristles against the established order. Today, in its role as the premier institute of education in a nation hungry for stability, growth and prosperity, it must enmesh itself into the establishment. From there it must build the nation. Just like Oxford.