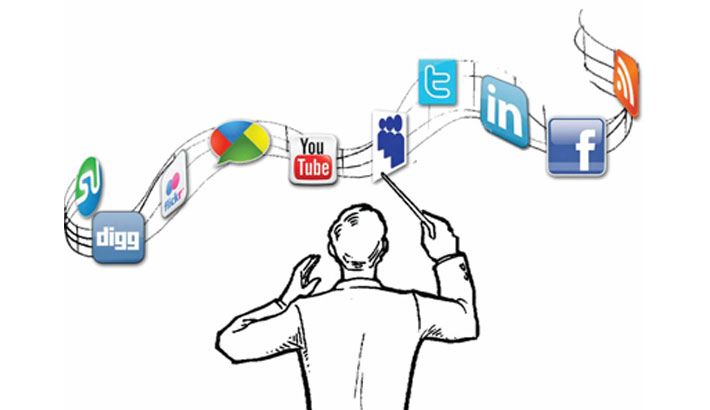 We are going through the Industry 4.0 era in which everything, more or less, is based on the internet and technology. From mainstream media to social media, every media outlet persuasively capsized their depictions that are incessantly inducing state system and foreign policy formulation. New Media, however, denotes a phase of media that illustrates news and information through the computer and internet-based media like social media, blogs, websites, email, music streaming services and virtual and sprightly reality.

New media also altered the scheme of old media such as television, radio and the printing press. Moreover, this alternation excludes analogue television shows, movies, books and magazines. If the segments incorporate the touch and role of the internet and technology enabling digital interaction in their processes through image, video and sound, they can be called components of new media.

The Arpanet is the very early phase of the successful communicative network of modern time, which was first used by the US army in 1969, and later dissolved by the advancement of the internet. By the time, the internet and technology encompassed many media staffs. It has made the way easier and the easiest, to some extent, for the people. Old media like TV channels, print media and radio were better at their time. The CNN Effect in the US foreign policy and world thoughts during the ‘70s and ‘80s is one of the stunning old media impacts on foreign policy decision making. Later, the Al Jazeera Effect also gave rise to a considerable discourse based on Oriental thoughts and Eastern standpoints. Old media have tremendous successes, but the new media constituted better alternatives for their audiences. From this, new media are the invincible media staff in this industry 4.0 era.

After civil society and interest groups, the media is at the most powerful stance of a state to impact foreign policy vitally. Old media to new media and conventional media to social media, every media outlet dominated the strongest position. Conventional media, though it is called the ‘fourth estate’, is not out of the influence of the governmental regime. New media reign is in the hand of mass people, but to some extent, the influence of surveillance capitalism is apparent nowadays. New media created such a stage where people share their views, talk on national and international policy issues that bring cogent deliberation to be taken on by the government for formulating policies on behalf of their interest. For instance, the murder of blogger Avijit Roy by an Islamic militant group was an abrupt occurrence that impaired the democratic standard of Bangladesh outside the country. For this, Bangladesh had gone under critical and dilemmatic crisis and suspicion from different corners of the world.

The role of new media, in this contemporary era, has staggeringly thrust into a great discourse in the nation-state system and foreign policy decision making. Public opinion is a dominant peculiarity of shaping and reshaping foreign policy formulation. It is the new media that generates more potent public opinion than any other old media. Social media, as a key part of new media, subjugated the utmost media reign. Facebook, Twitter and YouTube are predominantly orchestrating the current media industry that steers public opinion and thus influences foreign policy decision-making as well. For instance, the erstwhile US President Donald Trump and his post-ban on Twitter and Facebook are striking to be talked with. His white supremacy, xenophobia, racism and hatred to others could alternate the democratic reign of the US, but then the netizens confronted robust public opinion in new media after the incidents of George Floyd and the Capitol Hill riot. It has led the current president Joe Biden to pursue rigorous rule against white supremacy, xenophobia and a ban on Muslim countries.

“Foreign policy is nothing but the extension of domestic policy”, Otto Von Bismarck perfectly said. Domestic issues quarterback a state to a suitable and interest maximising foreign policy. From this stance, domestic issues are persuasive contributors to foreign policy decision-making. In the modern state system, policymakers pursue and formulate foreign policy based on different dimensions, approaches, facts and information, most of which come from the public opinion expressed in new media. It varies state to state as some follow stick policy and some do carrot, but interest is above for all.

It is quite rare (that) people get chances to talk about policies and express their views at the highest and various level(s) of state (mechanism) but new media revealed boundless and unlimited latitude for mass people to reflect their opinions. This enables new media to make discourse on an issue and, haunts the government to work for the mass people's interest. Talking about the recent issue of the Palestine-Israel crisis, public opinion of new media played a fruitful role in holding on uncountable supports around the globe against the oppressors what haunted the US to think of Israel lobby newly.

Looking at the performative dimension of foreign policy new media depends on the ongoing situation and deals with current issues. It is also just about based on public opinion. Looking at the case of the caricature of the Prophet (SM) and the ripostes of Immanuel Macron, Muslim world leaders were very turbulent and bellicose. Many Muslim countries temporarily cut off their economic relations with France, though missed out on business of millions of dollars. The USA, the UK, Canada, China and many powerful countries laid their positions on this talked-about issue. At that time, it was nothing but the new media that has given rise to an influential discourse.

In this contemporary era, new media has undoubtedly brought about a considerable role. Now, people have become more self-centred but this media phase connected them globally through the internet. They are divided physically but united and affiliated virtually. Even, this pandemic could be more outrageous and more breakneck in terms of communication and services as new media made ways easier for people to get services at their doors. However, new media influence foreign policy through public opinion and new discourse. It seems a threat to the power of state authorities, but greatly helps the government think of new policies and various perspectives so that it can maximise the interest of people and the state as well.

The writer is a student, International Relations, the