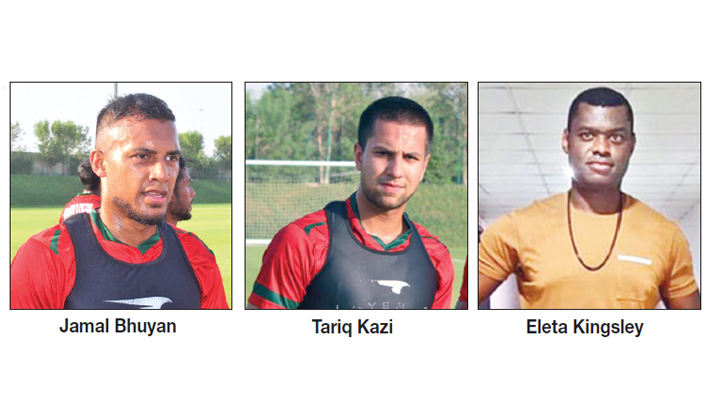 In recent days, bringing Bangladeshi descent footballers and foreign players with Bangladeshi citizenship into Bangladesh national team has created a lot of buzz in the social media platforms as well as in Bangladesh football community.

The failure of the national footballers in their disappointing FIFA, AFC qualifiers campaign, where they finished last in the five-team group with only two points from eight games, had made all believe that they seriously lacked a good number of players position-wise especially in front.

Finland-born defender Tariq Kazi, who made his national debut during the qualifying matches in Qatar, however, was able to impress with his performance while Eleta Kingsley, a 31-year-old forward from Nigeria’s recently getting Bangladeshi citizenship only added fuel to the fire.

The men in red and green are currently being led by Jamal Bhuyan, a Danmark-born footballer, who made his national debut for Bangladesh in 2013.

However, Bangladesh football fraternity has a mixed opinion on only recruiting Bangladeshi descent footballers or foreign players with Bangladeshi citizenship in the national team as they don’t find it as a proper solution to their declining performance over the last many years.

Former star national footballer Sheikh Mohammed Aslam marked psychological differences among those players and locals which he believed could hamper the unity of the team and preferred finding local talents from the grassroots.

“The biggest problem is psychological differences between these two types of players that could impact our team’s unity. The foreign players will come from a different atmosphere, a different culture. All of them may not adopt the new environment, the new style of play, new field and new players,” Aslam told The Daily Sun.

“If they fail to adapt or our players fail to communicate with them correctly, the team will be broken into two parts,” Aslam feared.

“We have to improve local players, their style of play, our football infrastructure rather than foreign recruits,” he added.

Former national footballer and prominent local coach Alfaz Ahmed said that recruiting a large number of foreign players would end the chances of local players to play for the national team.

“We already have some foreign descents in our team and if we bring more players then obviously it will end the chances of our local players,” he said.

“We have no ground and pitches, no low tier age level leagues, no qualified coaches, no academies. The federation should think about it. They should set up better grounds, academies and arrange age level leagues rather than wasting time finding foreign players,” Alfaz added.

National team goalkeeper Ashraful Islam Rana, however, welcomed the new players of Bangladeshi descent or Bangladeshi citizenship, who are currently in the rudder of the national team although he has some suggestions for the decision-makers before they take the final call.

“A foreign player may not always be a good player. But of course, we should give them chances to prove their worth. There are too many factors -- they need to cope up with our context, our values, and of course weather.

“Jamal also took two chances to prove his worth. My suggestion will be to bring young foreign players and nurture them with our grassroots players, give them equal chances and then we can select the best among them,” added Rana.

Bangladesh Football Federation and national team head coach Jamie Day also showed their interests in bringing those players of Bangladeshi descent or Bangladeshi citizenship in the national team although the latter admitted that it would be only a short-time solution to their growing number of problems.