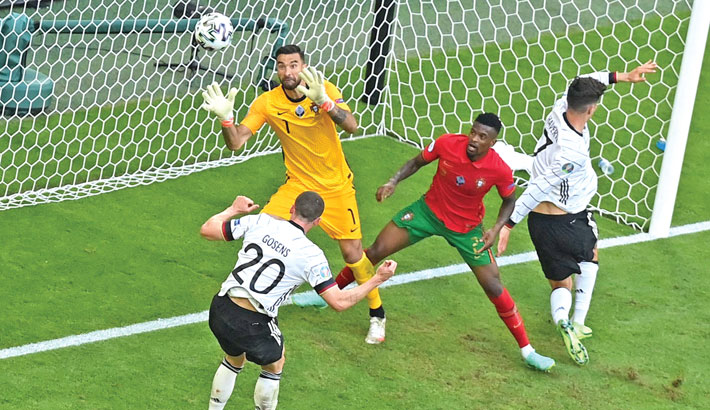 Germany breathed life into their Euro 2020 campaign with a stunning 4-2 win over holders Portugal in Munich on Saturday despite Cristiano Ronaldo moving closer to the all-time international goals record.

Saturday also saw Spain stumble to a 1-1 draw with Poland in Seville as the second round of group games at the tournament drew to a close.

Germany knew a defeat against Portugal at the Allianz Arena would leave them on the brink of being eliminated already from Group F, following their failure to make it beyond the group phase at the 2018 World Cup.

Portugal would have been through to the last 16 with a win and Ronaldo put them in front. It was the 36-year-old's record-extending 12th goal at the European Championship finals, and also his 107th international goal on his 177th appearance for his country.

That leaves him just two away from the all-time international record, set by Ali Daei who scored 109 times for Iran.

However, Germany turned things around before half-time as Ruben Dias and Raphael Guerreiro both scored own goals.

Robin Gosens set up Kai Havertz to make it 3-1 just after half-time and then headed in the fourth goal himself.

Jota pulled another one back for Portugal but the defeat jeopardises their chances of making it to the last 16 just as Germany now have the knockout stage in sight.

"We are allowed to feel a little euphoria," admitted Germany's Thomas Mueller.

Spain are still looking for a first win after being held to a 1-1 draw by Robert Lewandowski's Poland at La Cartuja.

Alvaro Morata gave the 2008 and 2012 European champions the lead in the first half, but skipper Lewandowski headed in Poland's equaliser after the break.

Still Spain could have won, but Gerard Moreno hit the post from a penalty.

Luis Enrique's side are third in Group E with just two points and need to beat Slovakia in their last game to be sure of going through. Poland have just one point.

"We lack a bit of luck," said Spain captain Jordi Alba. "We're doing things well and we are going to turn things around, I am convinced of that."