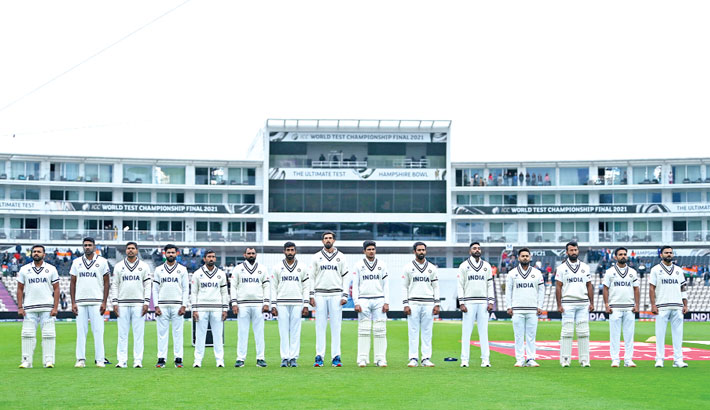 India cricketers are seen wearing black armbands in remembrance of Indian sprint icon Milkha Singh, who passed away due to COVID-19 at a hospital in the north Indian city of Chandigarh on Friday. — COLLECTED PHOTO

India captain Virat Kohli held firm in the face of accurate pace bowling as New Zealand fought back in the inaugural World Test Championship final at Southampton on Saturday.

After Friday's first day was washed out without a ball bowled, India had reached 120-3 when bad light led the umpires to take the players off for an early tea on the second day -- a decision greeted by jeers from the crowd given the floodlights were on full beam.

Kohli was 35 not out and Ajinkya Rahane 13 not out, with towering New Zealand paceman Kyle Jamieson having miserly figures of 1-14 in 12 overs.

But India lost three wickets either side of lunch to be 88-3.

Their position might have been worse had star batsman Kohli been given out caught behind down the legside off left-arm quick Trent Boult on 17.

But amid some on-field confusion, an umpire review led to replays that indicated Kohli had not hit the ball.

Rohit and Gill made a fine start amid New Zealand's swing and seam, even if a still-wet outfield meant they did not always get full value for their shots.

Sharma confidently clipped the first ball of the match, from Tim Southee, off his pads for three while Gill showed his class by driving Jamieson down the ground for four.

Gill, however, had a nasty moment on 23 when hit flush on the helmet by a Jamieson delivery that leapt off a good length.

This match, the culmination of two years of series between the leading Test nations, is worth $1.6 million to the winners and $800,000 to the runners-up.

The India team were wearing black armbands Saturday as a mark of respect for Milkha Singh following the national track legend's death from Covid-19 at the age of 91.