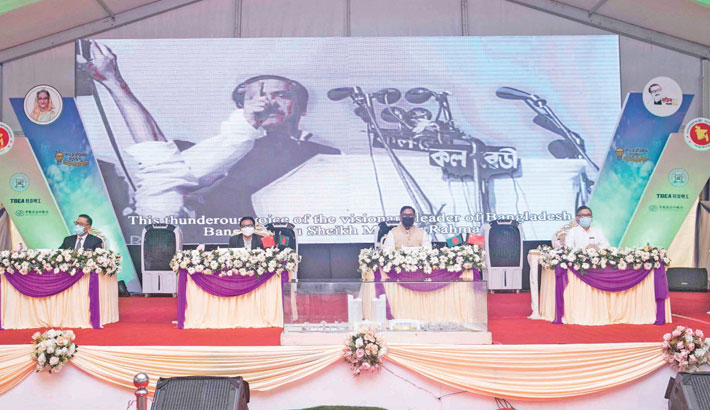 State Minister for Power, Energy and Mineral Resources Nasrul Hamid is seen at the inaugural ceremony of the construction of Dhanmondi Twin Tower project in the capital on Saturday.

State Minister for Power, Energy and Mineral Resources Nasrul Hamid laid emphasis on one stop service at the power distribution companies to reduce hassles of consumers.

“The services of providing connection, post-connection services, bills pay and information services should be delivered at a single place. It will reduce hassles of consumers, “he said at a foundation stone laying ceremony of iconic ‘Dhanmondi Twin Tower’ at Power House Campus at Hatirpool in Dhaka on Saturday.

The state minister said Dhanmondi Twin Tower will be equipped with modern technologies along with commercial spaces, which will increase the income of DPDC.

“The building will also have a digital museum to make young generation aware of progress and development in Bangladesh’s power sector,” Nasrul Hamid said.

The project “Expansion and Strengthening of Power System Network under DPDC area” has been taken with the assistance from China to enhance power supply in DPDC areas. The contractor company is TBEA Company Ltd of China.

Dhaka Power Distribution Company (DPDC) is establishing Dhanmondi Twin Tower in 7.32 acres of land at a cost of Tk 4.80 billion. Half of the space will remain open.

The building will 15 floors in addition to technological issues and commercial spaces.

The amenities will also include banquet hall, Cineplex, café and food corner in the building.