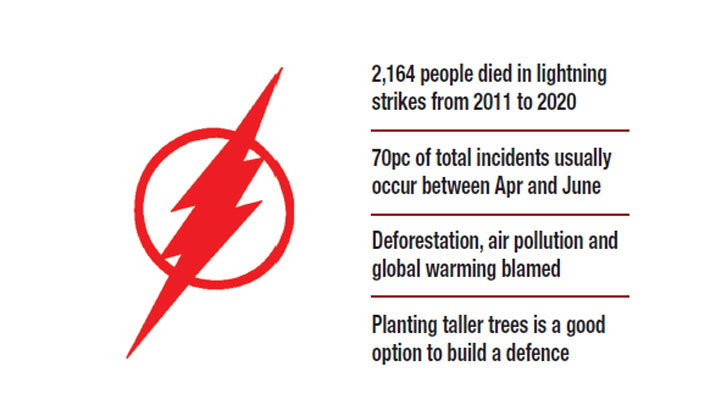 Lightning strike has turned into one of the deadliest natural disasters in Bangladesh claiming over 200 lives every year due to the loss of natural defence and lack of precautionary measures, say experts.

They blame deforestation, worsening air pollution and global warming, climate variability, and the growing use of mobile and other technological devices for the increase in the frequency of lightning strikes, reports UNB.

According to the Ministry of Disaster Management and Relief, 2,164 people died in lightning strikes in the country from 2011 to 2020. At least 216 people die every year on average in lightning strikes, more than by floods, cyclones and other natural calamities. The experts said about 70 percent of the total lightning strikes usually occur between April and June, and advise everyone to move with caution during this time.

Contacted, Md Rashim Molla, Secretary General of Save the Society and Thunderstorm Awareness Forum said, at least 177 people, including 122 farmers, were killed and 47 others injured, by lightning strikes across the country in between March 31 and June 7 this year as per their recent study.

The casualties were higher in Sunamganj, Netrokona, Kishoreganj and Gaibandha districts over the last one and a half months.  “Most of those killed by lightning strikes were working in open fields or fishing.  About 90% of the victims were men.” He said lightning has now turned into the deadliest natural disaster in the country. “The death toll from lightning strikes is much higher than that of cyclones and tidal surges, landslides and floods.”

Rashim said people in rural areas, croplands or playground and open spaces are mainly falling victims to lightning strikes for lack of protection.

Prof Ainun Nishat, a noted climate change researcher, said it seems the frequency of lightning strikes has increased in Bangladesh due to the rise in temperature caused by climate change. “But data relating to lightning strikes are not collected scientifically in our country. We should take steps for collecting solid data and carry out scientific studies in this regard.”

He said the overall temperature in the world is growing gradually and so far around one degree has already increased. “The growing temperature due to climate change is causing more water evaporation from the land and ocean. It’s increasing black clouds with potential lightning storms.”

Rashim Molla said climate change, decrease in tall trees, increase in rain clouds, random set-up of mobile towers and increase in temperature across the globe can be the main factors behind the unusual rise in thunderstorms.

Besides, Rashim said, a one-degree rise in temperature can cause the chances of thunderstorms to rise by 10 percent.

Gawher Nayeem Wahra, Member Secretary of Disaster Forum, said the main reason behind the increase in lightning strikes is the lack of trees. “Thunderbolts attack the tallest humans in a field or open space without trees.” “People’s knowledge on earthing is low. Old houses that had earthing are gone now along with trees,” he observed.

Gawher said many people die on the spot after being hit by lightning strikes while many injured slowly die as there is no treatment for lightning burns.

Ainun Nishat said the hotspots for the lightning strikes should be identified properly through scientific studies and effective steps need to be taken to protect people there.  “People should be made aware that they shouldn’t be there in the open field when back clouds gather in the sky.”

He said the government has taken a step for planting palm trees to lessen the casualties, but it takes around 20 years to raise such a tree.

He said the plantation of more trees is one of the solutions to save people from lightning strikes. “Lightning arresters should be set up so that those can catch the thunderbolts in the absence of trees. Many electric poles can be turned into arresters easily. Nepal has achieved great success using this.”

Rashim said the government can make people aware through mobile messaging 30-15 minutes before lightning starts striking in any particular areas as part of an effective step to check casualties.

Disaster Management Ministry secretary Mohammad Mohsin said high population density and people’s lack of awareness are the main reasons behind the growing lightning casualties.  “There’re many countries where the lightning frequency is much higher than Bangladesh but the causality is much lower due to less population density, strong warning systems and people’s better awareness.”      He said they have already taken an initiative for planting palm trees as a long-term protection measure as the number of taller trees such as date palm, betel nut, coconut and fan palm has declined.

As a short-term measure, Mohsin said, they are now planning to build concrete lightning shelters in haors, baors, beels as farmers and fishermen are being the worst victims of the lightning strikes. “We’ve already built some such shelters in Meherpur’s Gagni upazila.” Besides, he said, they are focusing on ensuring the installation of lightning arresters in every house to reduce the fatality from such a natural disaster.

The secretary said they are also developing an early warning system so that people can be aware half an hour before the possible lightning strikes.  “We need to set up 723 detection stations across the country for developing the warning system. “We’re working on reducing the lightning fatalities and we’re taking various effective initiatives. “

He said people’s awareness is crucial to lessen the lightning casualties.