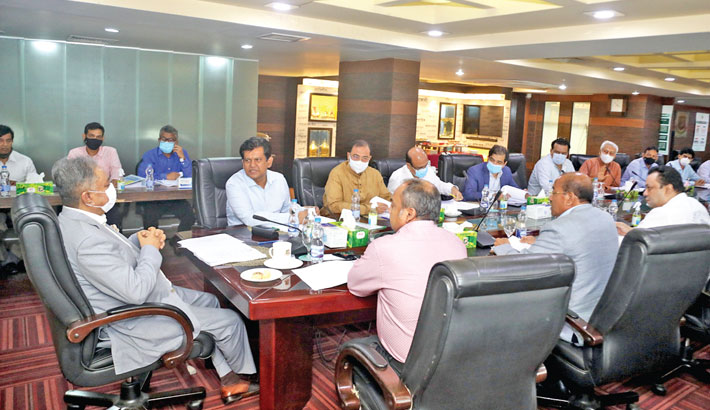 BCB President Nazmul Hassan Papon (left) is seen along with other directors at a board meeting at the home of cricket in Mirpur in the capital on Tuesday. – BCB PHOTO

Bangladesh Cricket Board President Nazmul Hassan Papon said on Tuesday that they will try to host the ICC Champions Trophy and will also try to become the joint host of the ICC World Cup and the ICC World T20 in the next cycle.

Hosts for ICC events will not be determined through an open bidding process and instead will be selected by its board in the next rights cycle from 2023-2031 which had been approved by the global body of the sport recently.

The process of selecting hosts for men's events in the cycle includes the return of the Champions Trophy and an expanded 50-over World Cup and T20 World Cup - will begin this month and the host country will be determined by September.

“A country needs to have 10 venues for hosting ICC World Cup while for World T20 the host country needs eight venues and that is difficult for us,” Nazmul told reporters after a nearly four-hour board meeting at BCB office in the capital.

“The Champions Trophy needs fewer venues which is alright for us and we decided to go for it,” he added.

In the other major decision taken in the 10th board meeting, BCB decided to hold their next ACM on July 7.

Nazmul’s second term is set to end in September this year and according to the constitution, the board must arrange the election within the next 45 days.

“We have finalised that the next AGM will be hosted on July 7,” said Nazmul.

Nazmul also informed that they have nearly finalised the contract list of its players but couldn’t disclose it as there were some last-minute adjustments.

“The national contract is finalised but we can’t disclose it right now as some changes will be made,” he said.

Nazmul however informed that Shakib Al Hasan and Taskin Ahmed, who weren’t part of the previous national contract, will be added to the new list while a total of 22 women cricketers will be included in the new national contract list.

BCB also extended the tenure of the national selection panel till the next T20 World Cup as the present panel has completed their tenure in June.

They also decided to introduce a shadow national team that will be called Bangladesh Tiger.

“The reason we decided to introduce the shadow national team as we feel when someone gets dropped from the national team they don’t have any place to go. They must have someplace to go,” he said.

BCB president also informed that they have not received any official complaint from clubs about the ongoing Dhaka Premier League.