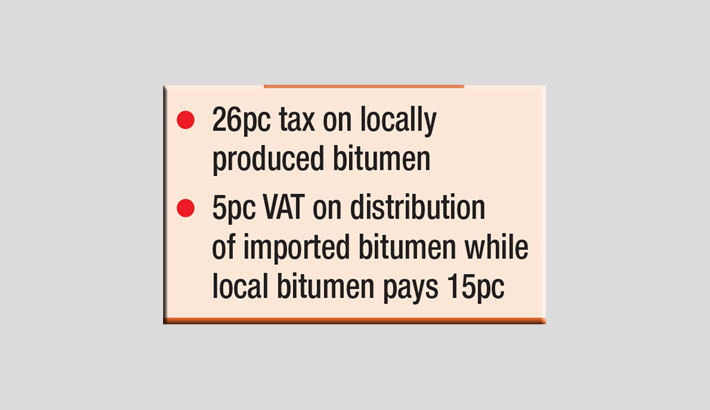 The dual rule regulating the bitumen sector is taking a heavy toll of tax on the local producers and granting tax waiver and other privileges to the importers --- creating an uneven competition in the market.

Damage of the roads and highways due to the use of substandard imported bitumen has prompted the local entrepreneurs to go for producing high-quality bitumen locally.

But the local producers are overburdened with tax and exposed to discriminatory rules.

They are to pay 26 percent tax on the production of bitumen while importers are free from such tax.

Experts and businessmen termed high tax on locally produced bitumen is contrary to the government’s industry-friendly policy and the rules of the World Trade Organization (WTO).

It has been learnt that the local producers have to pay 15 percent VAT on import of raw materials while import of finished bitumen is exempted from any VAT.

Supply of imported bitumen is subjected to 5 percent VAT but that of locally produced bitumen to 15 percent.

Business and revenue policy expert Manjur Ahmed said local bitumen producers should be exempted from the burden of VAT.

“VAT on the import of petroleum oils and oils-obtained minerals and crude should be reduced from 5 percent to 1 percent,” he said.

He advocated for withdrawing VAT on the import of raw materials for local production as importers are enjoying the facility.

Terming AT and AIT detrimental to the interest of the local entrepreneurs, FBCCI President Md Jashim Uddin suggested for withdrawal of AT and AIT.

“Bitumen is the main ingredients for constructing roads and highways,” he said, adding that high quality bitumen is needed for sustainable road construction in the country. Apart from constructing roads, bitumen is also in footpath, runway, the bottom of the boat and for protecting river  banks of and seas.

In total, a local manufacturer has to pay total 26 percent duty for importing the raw material.

Besides, the price of each barrel remains unchanged to 40 US dollar.

On the other hand, the importers of the finished bitumen enjoy tax benefit under two HS codes of 2713.20.10 and 2713.20.90.  In case of importing the bitumen in drums, the customs duty is Tk 4,500 per tonne. Besides, some traders import the bitumen in bulk amount when the tax is reduced to Tk 3,500 per tonne. Besides, the advance income tax of 2 percent and 3 percent of AT is imposed on the imports.

Md Farid Uddin, former senior member of the National Board of Revenue (NBR), said higher tax on local bitumen production than its import is against the interest of the local industry.

“The authorities have to amend the discriminatory tax structure. Because the responsibility to protect the industry goes to the government,” he said.

Besides, fraudulence was found in the import tariff of finished bitumen, according to information revealed in the investigation. Customs intelligence sources said the importers released thousands of bitumen drums through under-invoicing, depriving the government of huge revenue.

The practice of false declaration in bitumen import could not be stopped due to the negligence of the customs authorities, sources said. Substandard bitumen is entering the markets and the evidence of tax dodging remains untouched as the whole process of import is questionable.

Regarding the issue, Chattogram Chamber of Commerce and Industry (CCCI) President Mahmub Alam, also a bitumen importer, said the customs authority has to impose higher duty on bitumen import based on the international market price.

It has been learnt that the government relaxed the import duty of finished bitumen for the sake of local infrastructural development as there was no local manufacturer.

However, the commencement of a local bitumen manufacturing plant has created a new situation. The government should reconsider the import tariff to promote local industry, experts said, suggesting making a new guideline in national interest.

Besides, there is discrimination in the supply chain between the imported bitumen and locally manufactured products. The importers don’t face any tax burden to bitumen products as the products enjoy the tax holiday facility.

According to VAT and Supplementary Duty Act -2012, the importers have to pay 5 percent tax for the local supply chain. On other hand, the local producers have to pay 15 percent tax in advance. As a result, the cost of local production of bitumen is comparatively higher than the imported ones. Any local bitumen manufacturer can not survive in the market amid such discrimination.

It has been learnt that several importers import foreign products to enjoy the tax benefit though the local producer has sufficient products in the supply chain. As a result, the local manufacturers are facing losses, the country is spending a huge amount of foreign currency to buy foreign products.

Earlier in 2000, Prime Minister Sheikh Hasina saved the local cement industry by imposing 300 per cent duty on import. Following the time-befitting initiative, the government has to reconsider the policy to flourish the local production of bitumen by imposing higher tax on import.