Global violence as damaging for humanity as Covid-19 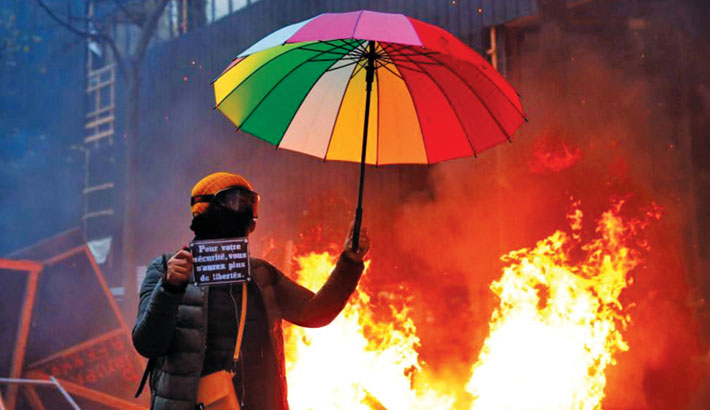 Currently the world is frightened due to the coronavirus which originated in Wuhan of China, towards the end of 2019. Economies across the globe got crippled as it started spreading. The Covid-19 pandemic led to dramatic losses of human life worldwide and presented an unprecedented challenge to global public health, food supply systems and employment. The economic and social disruption caused by the pandemic has been devastating. Tens of millions of people are at risk of falling into abject poverty. But let us take a good grasp whether people would have been safe and happy excluding coronavirus during 2020.

The agricultural law made by the Modi government in September 2020, exasperated the farmers of India and they held rallies across the country to bring about change in the new law. The measures introduced by the central government of India are some of the most sweeping changes to agriculture since the 1990s, in particular, regarding how crops can be sold on the market. 85 per cent of Indian farmers own fewer than five acres of land, and have long struggled with poverty and debt, with suicide rates being very high. The government argues that the law is a necessary step towards the modernisation of agriculture, allowing farmers to sell crops to private firms rather than just state-controlled markets where some prices are subsidised greatly by taxpayers. However, farmers say the law will leave them at the mercy of corporations by taking away the safety net of guaranteed price for certain crops and putting them at greater risk of losing their lands.

A fire broke out at the Lipa camp on December 23, 2020, in northwestern Bosnia and Herzegovina where migrants were living. The migrants and asylum seekers were daunted and had to move. Bosnian authorities had done little to address the unfolding humanitarian emergency. Two weeks after the fire, authorities set up 30 tents near the former camp site, each with the capacity for about 30 people. Some tents were not suitable for winter conditions and did not meet basic human housing conditions. Conditions in the Lipa temporary emergency camps were poor before the fire, with lack of basic services including critical hygiene and sanitation services such as sewage and running water. Due to the gross negligence and iniquitous acts of the authorities the refugees were plunged into abject misery.

The controversial cremation policy made by the Sri Lankan government aggrieved the Muslims during the pandemic. President Gotabaya Rajapaksa‘s government claimed that burying deceased victims of Covid-19 could contaminate ground water despite world health organisation guidelines that stipulate burial are safe and pose no risk during the pandemic. There have also been instances of cremation where authorities later acknowledged the deceased victims did not have the disease.

In June 2020, Indian and Chinese troops fought on the contested Himalayan border. India’s construction of a new road to a high altitude air base is seen as one of the main triggers for a clash with Chinese troops that left at least 20 soldiers dead. The most recent skirmish on January 20, 2021, left troops on both sides injured. But simmering tensions involved the risk of escalation and that can be devastating given both sides are established nuclear powers. There would also be an economic fallout as China is one of the biggest trading partners of most countries of the world. The military standoff is mirrored by growing political tensions which has strained ties between India’s Prime Minister Narendra Modi and the Chinese Premier Xi Jinping.

From the above discussion, it is evident that if we want to relate injustices caused to people in 2020 due to the emergence of the pandemic, only one example is relevant, that is the cremation policy of Sri Lanka to the Muslims, apart from people contracting the virus and expiring all over the world.

The coronavirus has taught us that little is a lot and health is wealth. But if the coronavirus would not have occurred, even then people would still have suffered due to various reasons. Therefore, it is ostensible that coronavirus is not the only bane and blight for humankind. It can be discerned that the political leaders across the globe are failing to build an egalitarian society. Countries should follow guidelines from the WHO. Countries should stop persecuting minorities. The political leaders should stop creating a climate of fear and reprisals. They should try to keep people away from getting into any cauldron. We want a world where humanity will prevail over injustice.