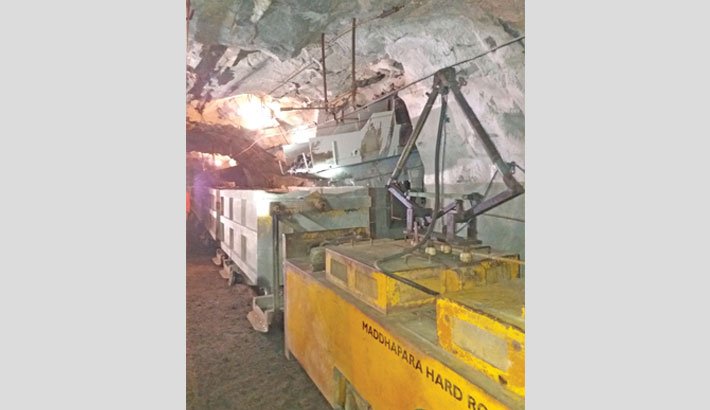 Maddhapara Granite Mining Company Ltd (MGMCL) of Petrobangla has been able to make profit after 14 years with the intervention of Prime Minister’s Office, said the sources related with the company.

They said the company has been earning profits for last two years after the PMO’s intervention.

According to the official figures, MGMCL earned Tk 112.6 million in the financial year 2018-19 for the first time after 14 years of continued losses.

There are allegations that the MGMCL incurred losses for a long time due a power corrupt syndicate within the company. During this long period, the company suffered Tk 5.65 billion losses.

GTC is planning to raise the production target as the demand of stones has gone up across the country.

A number of 750 people including foreign experts and local engineers worked at the company even during the pandemic.

MGMCL is the country’s only hard rock mining company of Petrobangla under the Ministry of Power, Energy and Mineral Resources, and the government was incorporated on August 04, 1998 with a paid up capital of Tk 35 billion under Company Act. Of 1994.

The main objective of the Project is to set up an underground hardrock mine at Maddhapara Dinajpur.

The mine is designed to produce 1.65 million M. tons of hardrock per annum to meet the requirement of flood control, construction of coastal and town protection embankment, construction and maintenance of bridges, roads and highways, embankment, river training, railway ballast, high rise buildings decorated tiles and other heavy construction works.

In 2007, the company first started mining rocks under own management. The mount of mined rocks was 300-400 metric tons in a shift daily. But due to lack of proper management, the production witnessed failures and losses. It incurred losses hugely.

Later in 2013, the work of the mining was given to Belarus company Germania Trest Consortium (GTC) under a six-year international deal, effective from Feb 2, 2014. It started mining in the same month. Last year, the MGMCL has signed a side letter agreement on February, 2020 with the GTC which came into force on July, 29, 2020.

For previous mismanagement, many machineries were damaged. So the production could not continue properly.