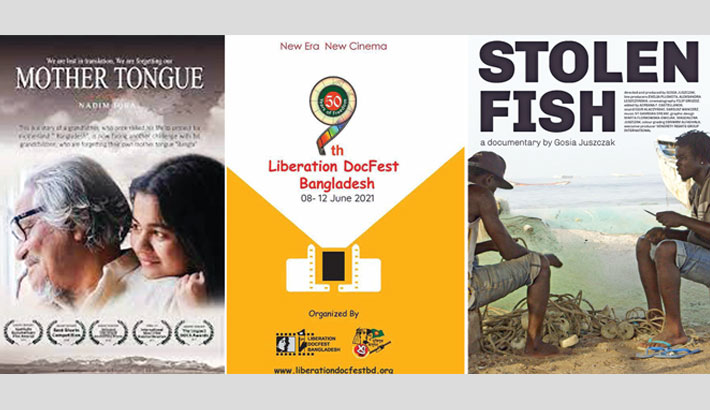 The five-day 9th Liberation DocFest begins today. Due to the ongoing pandemic, this year’s festival will be held virtually.

Marking the golden jubilee of the country’s independence and silver jubilee of Liberation War Museum, the 9th edition of the festival will introduce a series of screening sessions and special ceremonies.

A total of 125 documentaries will be screened at the festival. Earlier, over 1900 films from 112 countries were submitted for the festival.

Among the selected documentaries, five films will be screened at the local films competition category. The films are ‘A Mandolin in Exile’ by Rafiqul Anowar, ‘As the Grain Rises’ by Asma Beethe, Md Nadim Iqbal’s ‘Mother Tongue’, Shekh Al Mamun’s ‘Why Not’ and Sumon Delwar directed ‘Jolo Guerilla 71’. National Award-winning filmmaker Shabnam Ferdousi, veteran director Shameem Akhtar and film critic Alam Khorshed have selected the films for local category.

While, nine films, including, ‘Memory Minka’, ‘3 Logical Exits’, ‘A Farewell to Books’, ‘Son of the Streets’, ‘Stolen Fish’, ‘The Old Man and the Singer’ and ‘Gaze to the Touch’ will be screened at the foreign films category. The films have been selected by a jury, consisted of famous film personalities of the South Asia region.

And a total of 111 documentaries will be showcased at the Cinema of the World category.

The festival will also screen 12 documentaries, along with a special exhibition of twenty five one-minute short films to mark the Liberation War Museum’s 25th anniversary.

The Liberation DocFest Bangladesh previously known as ‘International Festival of Docufilms on Liberation and Human Rights’ is a festival dedicated to documentary cinema, seeking to highlight the struggle for Liberation and Human Rights of people in various parts of the world and its contemporary significance. It seeks to uphold new forms of viewing the human suffering and struggle for justice in global perspective. Festival also focuses on breaking new ground and on the great diversity and vitality of storytelling and creativity of the documentary genre.