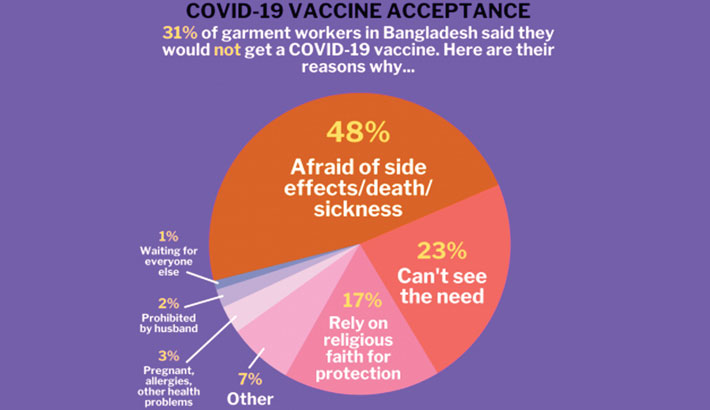 A large majority of Bangladesh garment workers do not have adequate information related to COVID-19 immunization, said a survey report.

South Asian Network on Economic Modeling (SANEM) and Microfinance Opportunities have been jointly conducted the survey to better understand how the lives of garment workers in Bangladesh have evolved during the COVID-19 crisis.

The survey report expressed concerns that inability to ensure access to COVID-19 vaccines will put millions of garment workers, who are employed in one of the country’s most vital industries, at risk.

Among those who think they are eligible, 76 percent said they want to get vaccinated.

As part of the project titled “Garment Worker Diaries”, SANEM and MFO have been collecting monthly data since April 2020 on the employment, income, food security, wage digitization and health of garment workers employed in factories across the five main industrial areas of Bangladesh - Chittagong, Dhaka City, Gazipur, Narayanganj, and Savar.

The survey was conducted among 1,285 workers over the phone, said a press release.

Just over three-quarters of the working respondents are women, roughly representative of workers in the sector as a whole. The survey focused on COVID-19 lockdown conditions as well as on garment workers’ awareness of and opinions about COVID-19 vaccinations.

The main objective of the project is to aid informed policy-making and brand initiatives, with regular and credible data collection and analysis, which can have a positive impact on the lives of garment workers.

The project has been ground-breaking in its approach to improving transparency in global supply chains and in its attempt to help relevant authorities better understand how the pandemic has affected garment workers, said SANEM.

According to the report, 28 percent of respondents stated that they were not eligible for the vaccine, 63 percent said they would get the vaccine if they became eligible.

Out of the 31 percent who were unwilling to get the vaccine, 48 percent were afraid of side-effects, falling ill or dying, 23 percent did not feel the necessity or the benefit of getting vaccinated.

In order to facilitate the recovery process of RMG production, export and the economy as a whole, factory owners, government officials, policymakers and advocacy groups will have to come together to prioritize the health and safety of workers, the report said.

The report said the ready-made garment industry in Bangladesh, which has been one of the key drivers of our economic growth, has faced severe challenges since the start of the pandemic. Consequently, the lives of the workers employed by the sector have been affected in various ways.

In early April in 2021, Bangladesh entered yet another round of COVID induced lockdowns after being hit by a second wave of infections.

The lockdown’s duration, of uncertain length, will be contingent on the success of the national vaccination campaign, as well as on the containment of any Indian variant strain, among other factors.

Despite the nationwide lockdown, garment-producing factories across the manufacturing sector were allowed to operate with strict guidelines in place.

The report indicated that 92 percent of the surveyed workers reported that there was no change in their means of transport, indicating that the majority of workers usually walk to the factories.

Among the workers surveyed, only 8 percent of the workers said they had to use alternative means to get to work and 4 percent reported using factory-provided transportation.

The survey indicated that not all factories took the necessary measures to ensure transportation to work for those workers who are reliant upon it.