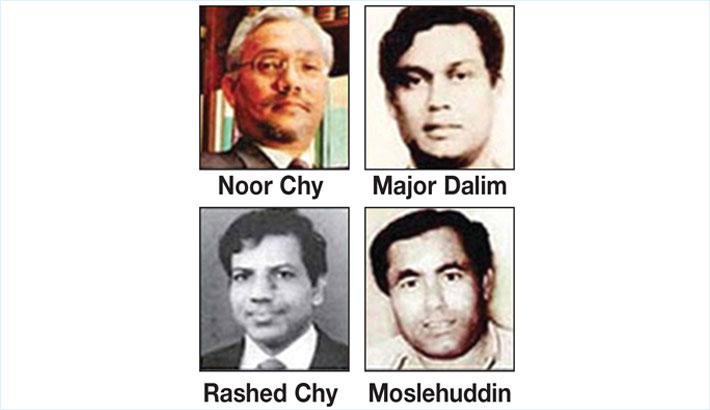 The government has finalised a decision to revoke the freedom fighter gallantry awards of four fugitive killers of Father of the Nation Bangabandhu Sheikh Mujibur Rahman.

Noor received the gallantry award ‘Bir Bikram’ while Dalim ‘Bir Uttam’, and Rashed and Moslehuddin ‘Bir Pratik’ for their contributions to the country’s War of Liberation in 1971.

“The gazette will be published within 4-5 days,” Liberation War Affairs Minister AKM Mozammel Haque on Wednesday said, adding that a moral decision has already been made in this regard and now it is a matter of time to issue the circular.

The minister came up with the remarks before joining a meeting of the Cabinet Committee on Law and Order at the Secretariat.

Mozammel, also a valiant freedom fighter, said the decision to revoke the awards of Bangabandhu’s killers was taken at a recent meeting of the Jatiya Muktijoddha Council (Jamuka).

Once the awards are cancelled, the absconding killers and their families will no longer be able to avail themselves of any benefit for freedom fighters.

On December 15 last, the High Court suspended the awards of the fugitive killers. Later in February, a meeting of the Jamuka made the decision to cancel the awards and sent it to the Ministry of Liberation War Affairs for approval.

At the same meeting, the council decided to revoke gallantry award ‘Bir Uttam’ of military ruler Ziaur Rahman for defying the Constitution, assisting the self-proclaimed killers of Bangabandhu in fleeing the country and appointing them to important state positions.

On August 15, 1975, four years after Bangladesh’s independence, Bangabandhu and most of his family members were killed by a group of derailed army officials.

Later, when Ziaur Rahman assumed power, he revised the Constitution and imposed indemnity to protect the killers permanently. The killers had also been appointed to several state positions.

When Awami League returned to power in 1996 under the leadership of Sheikh Hasina, it took initiative to bring the killers to book.

Of the 12 convicted killers of Bangabandhu, five were executed while one died of natural death outside the country and five others remain at large.