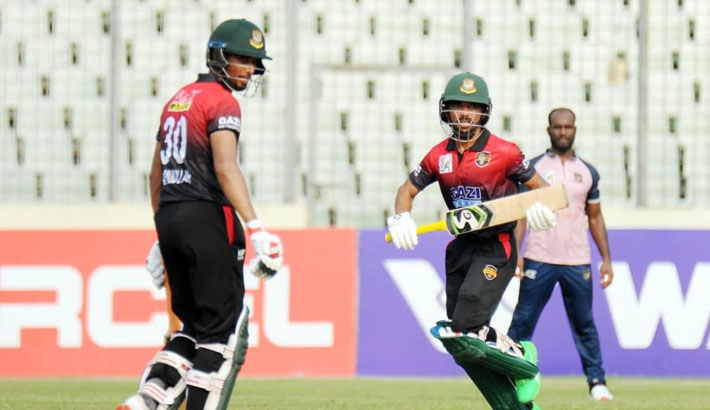 Both Mahmudullah and Mominul struck 62 not out and 54 runs respectively as Gazi Group reached 156-3 in 18.5 overs after Mahmudullah claimed 2-23 to restrict Sheikh Jamal to 151-7 in their stipulated overs.

Earlier, in the day’s first match, Prime Doleshwar Sporting Club earned their first win in the tournament after defeating Khelaghar Samaj Kallyan Samity by 19 runs at the same venue.

Prime Bank Cricket Club moved to the top of the points table after they managed to secure a three-wicket win against Shinepukur Cricket Club in the day’s third and final match.

Chasing a modest target, Gazi Group lost both the openers within the powerplay as off-spinner Enamul Haque claimed both the scalps to remove both Shahadat Hossain and Soumya Sarkar on 13.

Mahmudullah and Mominul then added a 97-run stand for the third wicket which laid the platform of the first win for Gazi Group in the ongoing meet.

The duo was hardly troubled by the opposition bowling unit and Mahmudullah reached his half-century in style as he came inside out against leg-spinner Tanbir Hayder to hit a superb six and remained unbeaten while hitting four fours and two sixes in his 51-ball innings.

Mominul was dismissed by left-arm pacer Salahuddin Shakil after hitting eight fours in his 36-ball innings but it could hardly deny them to register an easy win at the end.

Selector Habibul Bashar couldn’t hide his happiness as he clapped loudly from the stands for Mahmudullah as his return to bowling has increased their bowling option for the Tigers in the upcoming series as he had earlier suffered from the back injury.

Shykat Ali (33) and Mohammad Ashraful (41) gave Sheikh Jamal another strong opening start as like the previous match by putting up a 69-run stand after they were sent to bat first.

Ashraful, who hit four sixes in the innings, paid the price of his over-ambitious shot as he was caught at point by Nasum Ahmed of Ariful Islam and since his fall of wicket, Sheikh Jamal could only manage to score 52 runs in the last eight overs of their innings.

Opener Imran Uzzaman made a quickfire 40 off 17 balls with three fours and four sixes while Saif Hassan made 28 runs as Prime Doleshwar made 149-6 against Khelaghar after they were sent to bat first.

Khelaghar were reduced to 78-8 in the chase but Rishad Hossain played a late cameo of 37 off 19 balls with two fours and three sixes only to finish in the losing side as they were bowled out for 130 runs in 20 overs.

Kamrul Islam, Rejaur Rahman and Enamul Haque Jnr all chipped in with two wickets each for Prime Doleshwar.

In a low-scoring thriller, Shinepukur were bowled out for 119 runs in 20 overs after Prime Bank’s spinner duo Nayeem Hasan and Monir Hossain took three and two wickets respectively.

Prime Bank was very much in the chase as they reached 60-1 in the eighth over but after Tamim Iqbal’s getting run out on 32, they lost wickets at regular intervals with left-arm spinner Tanvir Islam taking three wickets.

Nayeem (18 not out) and Raqibul Hasan (18 not out) however ensured Prime Bank reaching home as they made 120-7 with three balls to spare to hand Shinepukur another defeat.