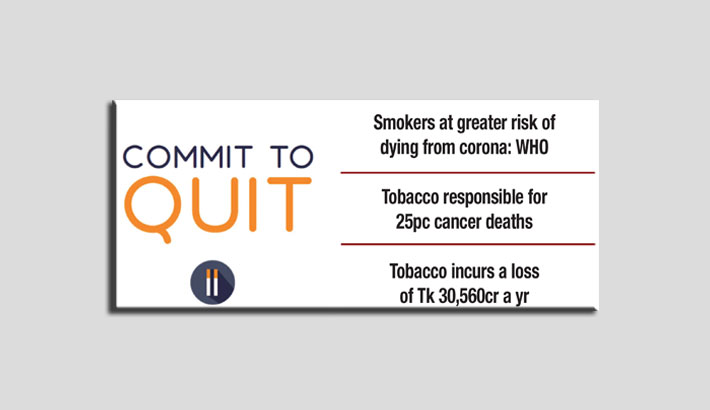 Anti-tobacco campaigners demanded steps to put up prices of tobacco products and amend the tobacco control law in a bid to save lives from the harmful effects of tobacco.

They said tobacco is one of the major contributing factors to lung and cardiovascular diseases. Tobacco users are two to four times more likely to get heart diseases and stroke than nonsmokers, they said.

Like other countries across the globe, the World No Tobacco Day was observed in Bangladesh on Monday. Different anti-tobacco organizations arranged various programmes including virtual discussion with a pledge to free the country from the scourge of tobacco.

This year the theme of the day was ‘Commit to quit’. In Bangladesh, the theme was ‘Asun Amra Protigga Kori, Jibon Bachate Tamak Chari’ (Let’s pledge to stop consuming tobacco).

On the occasion of the day, ABM Zubair, Executive Director of PROGGA, said once prices of tobacco products are raised, it decreases the use of tobacco, tobacco-related diseases and other losses.

According to a study of Bangladesh Cancer Society, use of tobacco is responsible for the death of around 126,000 people every year in Bangladesh.

According to experts, there are many benefits of quitting the tobacco as abstaining from tobacco use for a whole year reduces the risk of coronary heart disease by about half that of a smoker.

Within 10 years of quitting, the risk of lung cancer falls to about half that of a smoker and comparing to those who continued tobacco use, those who quit at about 30-40 years of age, gain almost 9-10 years of life expectancy.

Consumption of tobacco, responsible for 25 percent of all cancer deaths globally, is linked to at least 20 cancer types. Particularly, lung cancer risk is around 25 times higher in tobacco users compared with those who have never smoked.

About 80% of all COPD (chronic obstructive pulmonary disease) is caused by cigarette smoking and smokers are 13 times more likely to die from COPD than non-smokers.

Smokers face a 40 to 50 percent higher risk of developing severe disease and death from Covid-19, says WHO. The financial loss incurred per year due to tobacco use exceeds Tk 30,560 crore.