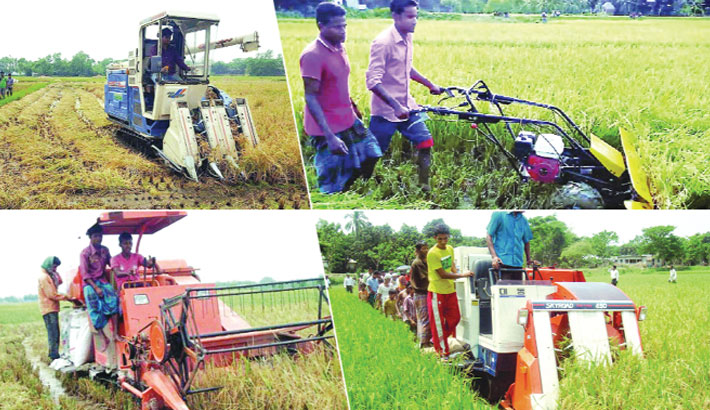 Labour crisis during the transplanting and harvesting period is a very common problem in Bangladesh. The direct and indirect effects of industrialisation have driven farm labourers from farming to other occupations. Thus, the number of agricultural workers is constantly decreasing, and in the future, the crisis will increase. Agri-mechanisation can solve this problem as modern agricultural machinery works much faster than human labour. It also needs fewer people to operate them. However, we know mechanisation requires comparatively large land and collective farms for synchronised cultivation.

The farming lands of our country are small due to various reasons, including division of inheritance, and farmers are also not keen on pairing them. Another problem is all the farmers in an area do not cultivate the same variety of crops in their land at the same time. Due to the selection of different varieties and planting time, all the crops are not planted and do not get mature at the same time. That is why using agricultural machinery at any particular locality of Bangladesh is not economically viable.

Given that scientists thought that if the whole process of cultivating crops in an area can be brought under the same system, the machinery could be used profitably maintaining the land's borderline. So they have come up with a compelling way named it 'Synchronised Cultivation'.

The present pro-farmer government has taken various steps for sustainable mechanisation to make agriculture modern and profitable.  Synchronised cultivation is one of these steps. In this process, farmers will transplant together the same variety of a crop or different varieties with the same growth duration in a particular area using a machine. In this method, sowing of crops in the field, intercultural management and harvesting can be done simultaneously using different machines. For Example, if farmers want to plant rice in a synchronised way, they have to grow seedlings in portable trays which can transplant in the main field using a rice transplanter. As planted together, all the rice will become harvest-ready at the same time. Therefore, the rice can be harvest and threshed together with the help of a machine. For these reasons, the use of machinery in synchronised cultivation will become more accessible, and the number will rise. As a result, time, labour, and the overall cost will decrease in rice cultivation.

Under the leadership of the Ministry of Agriculture, Bangladesh Rice Research Institute (BRRI) and the Department of Agricultural Extension implemented synchronised cultivation on a pilot basis in 12 upazilas of 12 districts of the country for the first time in the fiscal year 2019-20. Due to its great success, the government decided to continue the programme in the fiscal year 2020-21 as well.

During the last Boro season, the programme was implemented in 61 districts on a broader scale. The Department of Agricultural Extension is directly responsible for its implementation, and the Bangladesh Rice Research Institute (BRRI) provides technical assistance. According to rice scientists, this initiative will lead to a rapid expansion of newly released varieties of rice and increase the use of machinery. Synchronised cultivation methods can prevent wastage of time in transporting agricultural machinery from one land to another. Agricultural machinery can profitably be operated even on a small amount of land at total efficiency.

The government's recently formulated synchronised cultivation policy states that one synchronised plot should be exhibited in at least one upazila in each district by the synchronised farmers' group. Furthermore, this process should be continued with new groups to implement it in phases every year. The maximum number of farmers in each group should be 35, and the amount of land should be 50-60 acres. The number of female farmers in each group should be at least 30%. The selection of crop varieties should be made in a way so that the growth duration of the variety can equalise. Raising and planting of rice seedlings should be done through mat nursery to harvest rice from roadside fields before moving inside the field. In this way, it will be easier to use machines in crop production.

One of the challenges in synchronised cultivation is the production of mat-type rice seedlings in trays. In this method, seedlings are made in polythene or flexible trays without making a seedbed. Therefore, according to the planting time, seeding has to be raise. It uses a mixture of soil and cow dung in the ratio of 3:2. The seeds are then sprinkled again with a mixture of half the soil and cow dung, placed on a flat surface and soaked with water. Seedlings emerge within three days of seedbed formation. However, the production of mat-type seedlings seems to be somewhat complicated for the farmers. However, it is possible to produce mat-type saplings successfully through integrated initiatives. If the germination capacity of the seed is less than 80%, an additional seed should be placed in the tray as required.

Before sowing, the seeds in the tray should be soaked for 18-20 hours with Azoxitrobin or Pyraclostrobin group anti-fungal solutions like Amistartop or Celtima (2-3 ml/liter per kg of seed). Then it should be washed with clean water and rest aside. Depending on the variety, 120-140 grams of seeds should be sown in each tray. Seeds should be sown in such a way that there are 2-3 seedlings per centimetre. In case of the disease in the trays, Amistartop or Celtima should be mixed in 2-3 ml/litre of water and sprayed well. The trays should not be irrigated approximately within six hours after spraying. After sowing the seeds evenly, one layer of soil should be lightly applied, and it in no way should be too thick.

At present, the farmers of our country complaining that rice cultivation is not much profitable. One of the ways to make it profitable is to reduce production costs. Thus, there is no alternative to synchronised cultivation. In the conventional method, transplanting seedlings in one hectare of land costs about Tk 12,000-16,000, whereas using rice transplanter costs only Tk 3000-3500. In the same way, in the case of harvesting, the cost of harvesting rice with a combined harvester is Tk 3,500-4,000 per hectare, while the cost of cutting, transporting, and threshing with labour costs around Tk 18,000-20,000 per hectare in different areas. Thus, if mechanisation can be introduced for planting and harvesting, it will be possible to save about taka 25000-26000 per hectare.

The writer is a senior officer at Bangladesh Rice Research Institute.