Public trial in the era of social media 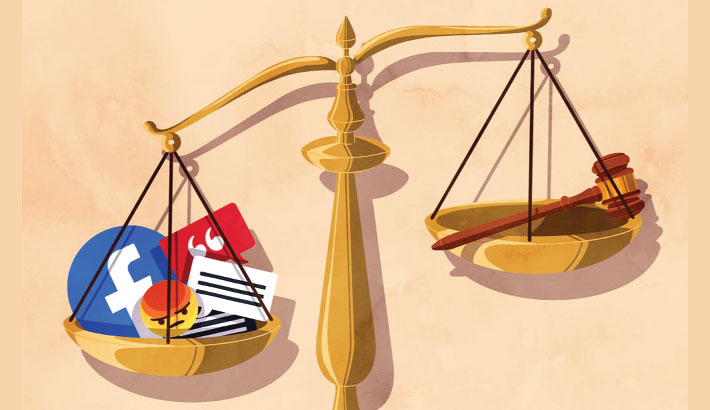 Just shut your eyes for a while and imagine! Someone out of enmity or with bribe or other kind of illegitimate favour or simply out of fun, solicits a famous or infamous news portal to publish a news depicting you or your words or actions in a negative way. The news spreads like fire on the social media. Majority, if not all, of the users keep sharing the news. The readers get swayed with the ill-tailored facts and quickly come to verdict that you are guilty followed by vast public shaming. In an hour or two, the misunderstood or misrepresented facts shall be repeated so many times that even you will start believing the narrative of the accuser. It is a nightmare, no? Once the true facts come out, is there a way to reclaim your lost reputation in the age of internet which does not forget? Do you think the lost reputation can be regained with subsequent acquittal in the court of law of the same charge? It is hardly possible because the news of acquittal might not generate similar buzz on social media as your guilt. If you are in the wrong end, you might never come out of the trauma.

If you regularly use popular social media platforms like Facebook in Bangladesh, you probably know the rules of ‘FacebookTrial’ for adjudicating an alleged crime. Once you are accused of an offence, in the ‘Court of Facebook’ (!) you are automatically considered as guilty. This Court (!) neither seeks any evidence nor witness. Once you are accused, none can save your reputation from being harmed by the collective effervescence of the Facebook users. Such a situation has transformed the age-old legal principle of “Presumption of Innocence”. In the criminal justice system, a person is considered innocent even after an accusation so long as the person is not positively proven to be guilty beyond reasonable doubt. This ancient legal doctrine has thus evolved to be ‘presumption of guilt’ in the social media sphere. Even a subsequent verdict of acquittal by the court of law at times fail to restore the reputation of the innocent. The alleged perpetrator sparingly turns into the victim of social media trial with no forum of remedy whatsoever.

The evil in existing media trial has been aggravated by social media to a greater extent. Because unlike traditional media, news on the social media spreads faster, to a wider audience and receives collective reaction in a small span of time. The evolution ‘presumption of guilt’ in public sphere has brought multifarious challenges. The principle of ‘presumption of innocence’ was developed out of a simple reasoning that none should be allowed to accuse another person without any proof. In the so called ‘Court of Facebook’, an accused is entitled to no due process of law and there is no need for proof to reach a conclusion. Such trial in the social media evades the requirements of investigating the truth. Facebook users become judge, jury, lawyer, and executioner. The judgments are released as soon as the news breaks out. There is no inquiry, investigation, or witness hearing. Trial in absentia, i.e., trial without the presence of the accused is the rule in the so called ‘Court of Facebook’. Although it might be argued that these public opinion vis-a-vis verdicts are nothing close to rulings in the court of law, the truth is one cannot just ignore the consequential loss of reputation and the mental damage that flows from Facebook trial.

The latest Global Digital Report published by ‘We are Social’ on February 2021 states that currently almost 45 million Bangladeshis use social media. These huge number of social media users include not only the educated lower middle-middle class and elite segment of the society but also the perhaps uneducated or less educated segment of the country with zero legal literacy. Irrespective of institutional or social media literacy, all users can equally post and comment on social media without any sort of filtering. The absence of a country office in Bangladesh of these social media platforms makes it harder for Government to crack down the meddlers of public justice. The resulting overwhelming absence of legal literacy in the social media platforms makes it a deadly weapon against any person’s reputation and goodwill. The temptation for social media likes, reacts and comments of the mass population in the social media instigate them to colorise incidents without any effort to know the truth. The social media reincarnates to become public courts diminishing the tenets of criminal justice system. Thus, the accused are called out as perpetrators, the victims seldom get remedy and the judgments of the real courts adjudicating true facts and circumstances fall short of public confidence.

A next-level problem in the age of search engines is that the internet does not forget. Due to search engine optimization methods, the news that depicts acquittal of an accused might not generate equalnumber of ‘clicks’ as the news about accusation of a crime. Thus, although the news about someone’s accusation will appear online and might even come in the first page of the google or Facebook search, the subsequent acquittal will not appear in the front page of the search engine due to the sensation of the latter.

The jurists of the country are still perhaps in consensus about the public interest in crime stories in news media. However, what social media does is more than crime story, they provide their own commentary, they colorise incidents and can even kill a case to a great extent. Thus, the apparent consensus of the jurists should be revisited. Public interest may be served even without mentioning names of the victims and alleged perpetrators till the trial ends in the Court of Law.The social media platforms are also not taking responsibilities to stop such intervention in an ongoing investigation. A strong legal framework imposing obligations on the social media platforms for increasing social media and legal literacy in the forum is the need of time.

The writer is a Lecturer at the