Humans’ impact on Earth began earlier than we thought 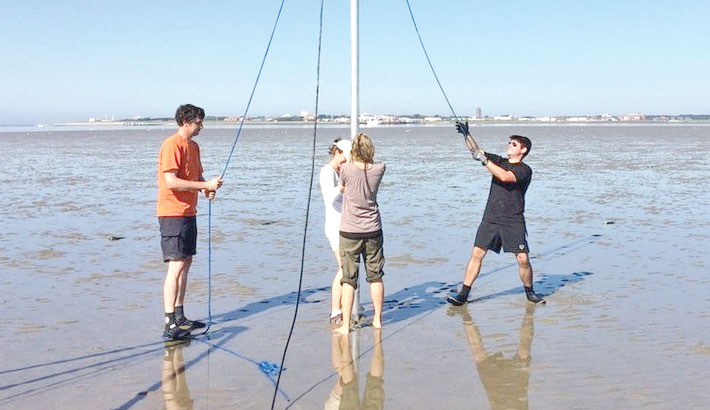 Scientists have been uncorking long, thin cylinders of soil from wetlands and riverbeds in an attempt to look back in time and understand the impact humans have had on nature. The results have made them radically rethink previous assumptions about when this started, reports BBC.

“It’s amazing - one of the most fascinating things,” says Ondrejj Mottl.

The object of his fascination? Mud. Dr Mottl and his colleagues have been extracting “mud cores” from the depths of lakes and wetlands. These long, tightly compacted cylinders of earth contain a record of exactly what grew in that soil when, going back millennia.

“They’re our window to the past,” says Dr Mottl, an ecologist based in Bergen, Norway.

Analysing these cores of mud, looking at the pollen that has settled in each layer, has brought an entirely new understanding of when human activity started changing vegetation.

Scientists had expected to see the first “signal” of human intervention a few centuries ago, when landscapes really started to transform during the Industrial Revolution. Pollen records from the mud core research have led them to radically readjust that assumption, and track our species’ first impact on the natural world back to about 4,000 years ago.

It’s a discovery that has major implications for the future of our forests and other natural landscapes.

The evidence for all these grand theories exists in the tiny grains of pollen that fell and settled in layer upon layer of mud over the centuries. By carefully extracting that mud, like a cork from a wine bottle, and analysing the “fossil pollen” at different depths, researchers were able to carbon date each mud layer to work out what grew, when.

But what exactly did they spot that led them to rethink theories about when man had started to impact nature? The team found in the mud an uptick in the rate of change - layer by layer - of pollen composition. Basically, each layer began to look more different from the other in terms of the plant pollen it contained.

The scientists chose to look back 18,000 years to capture the era time when the planet had started to emerge from the last ice age. Earth was defrosting, so almost every environment was changing.

“The last 10,000 years was - climate-wise - relatively stable, so [that’s when] we’re able to pick up the influence of humans,” says Suzette Flantua, a global ecologist also at the University of Bergen, That influence started as soon as we - humans - began to clear wild vegetation to make space for ourselves, our crops and our livestock.

“We see that trend [in vegetation change] picking up at different points,” says Dr Flantua. It’s earlier in Asia and South America, and slightly later - about 2,000 years ago - in Europe.

According to many biologists and climate scientists, we are now in a period of the Earth’s history that can be dubbed the Anthropocene - an epoch of human influence on our planet. More than three quarters of the Earth’s land surface has been altered by human activity.

The mud core findings don’t only change assumptions about the past. They also provide a valuable insight into where our planet’s natural environment is heading.

The uptick in change, detected in that long-buried pollen, is continuing ever faster.

“We’re going to continue to get that large scale human influence and on top of that there’s climate change,” says Dr Jonathan Overpeck, a climate scientist based at the University of Michigan.

It means, somewhat ironically, that if forests are to lock up as much carbon as possible and help us to minimise the impacts of climate change, we are going to have to intervene more in exactly how those forests grow.

While many conservationists support the protection of forests - leaving them alone and in tact to do their job of giving their wildlife a home and keeping lots of carbon locked away - we may have changed our planet so radically that forests will need some hands-on help simply to survive.

“There’s some climate change already baked in,” Dr Overpeck explains. “And most of the old trees in our forests were seedlings when it was cooler, so we need to put in seedlings that will thrive when it’s warmer.”

To protect forests from wildfires, which are also becoming more frequent and fiercer in warmer, drier climates, could require much more intensive forest management, too - removing smaller trees that provide that provide the “fine fuel” for wildfires.

Dr Overpeck suggests that, if we do this correctly, we could “farm forests for carbon” creating jobs at the same time.

What that will mean for biodiversity - the myriad plant and animal species that currently rely on the existing forest habitat - is much less clear and far more complicated to make a plan for. But the scientists combing through Earth’s ancient pollen record say it could also guide how we protect and restore the natural habitats we have left.

“This is the critical thing,” says Dr Mottl. “To know what we are trying to restore, to know what exactly is pristine wilderness - this is the most important thing. “Lots of national parks are trying to be wild and pristine, without knowing if what they are doing is returning a place to its natural state.”

Rather than make assumptions based on what grows in a wild landscape now, the use of mud cores drills down to ask the Earth directly about its history. And until we have the information from nature itself, says Dr Mottl, we can’t know if what we are doing for nature is for the best.