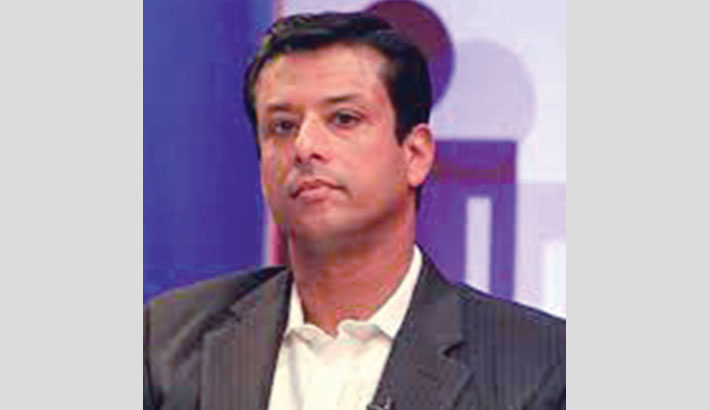 Prime Minister's ICT Adviser Sajeeb Ahmed Wazed has highlighted how Bangladesh harnessed the power of Science, Technology, and Innovation (STI) to achieve its transformative socio-economic development during the past decade at the UN.

Highlighting the success of the “Digital Bangladesh” vision of Prime Minister Sheikh Hasina, he said, “Bangladesh is a perfect example of how Science, Technology and Innovation can drive growth and development.”

The ICT Adviser was delivering a keynote speech at a thematic panel discussion titled “Leveraging the Power of Science, Technology, and Innovation to fight multidimensional vulnerabilities and achieve the sustainable development Goals” on Tuesday.

The discussion was held as part of the ongoing Preparatory Committee Meeting of the 5th United Nations Conference on the LDCs.

Sajeeb Ahmed Wazed said the policy stimulated a high GDP growth in the country, which exceeded not only India and Pakistan, but also China in recent years. “Even during the COVID-19 pandemic, Bangladesh’s economy showed upward trajectory. The per capita income has reached $2227, overtaking India.” The ICT Adviser said that the implementation of the “Digital Bangladesh” has helped the country to quickly adapt to the new business and work environment imposed by the COVID-19 pandemic.

“During the lockdown, it could quickly switch to online governance, online education, and online work. The mobile tracing and tracking system helped control the infection rate. Bangladesh, therefore, features among the lowest infected countries in the world,” he added.

Tracing back to the ICT situation in Bangladesh twelve years ago, Sajeeb Wazed said the broadband connection was one of the most expensive during that time. As a result, the internet user was only 0.3 per cent of the population.

“Bangladesh today offers very cheap internet connections, which allowed more than 116 million people to get online. This is 70 per cent of the entire population.”

He said the success in this sector has come in the way of high investment by the government as well as successful public-private partnership models.

“Today, 90 per cent of the geographical area is covered by 4G connections,” the ICT Adviser said adding that 5G will be launched this year. The Bangabandhu Sattelite-1, Bangladesh’s first satellite will soon bring the remotest parts of the country and the islands under the coverage of the internet network.”

He shared information about many landmark initiatives of the government, which are contributing to the lives and livelihoods of the people, especially those who are the furthest behind.

The ICT Adviser said that the government has placed ICT education at the top of its agenda. In almost every school in Bangladesh, Sheikh Russel Digital lab has been established and more than two million citizens were given different kinds of ICT training.

In turn, he said Bangladesh has seen rapid growth in startups, locally-led STI initiatives, and cost-effective digital products and services.

All these good practices in STI helped Bangladesh to transform itself from a digitally backward country to a digitally advanced country in just a decade. Bangladesh offers to share the experience and expertise of its digital journey with other developing and least developed countries.

She commended his leadership to advance the ‘Digital Bangladesh’ vision of Prime Minister Sheikh Hasina, which was instrumental in expanding internet connectivity, leading to the growth of e-governance and e-businesses, and helping the country to be more inclusive and prosperous.

The week-long preparatory committee meeting of the LDC5 conference kicked off on 24 May 2021 in New York. Ambassador Rabab Fatima and the Permanent Representative of Canada Ambassador Bob Ray are co-chairing the LDC5 PrepCom meeting, which will continue until May 28.

The Conference will be held in Doha, Qatar in January 2022, which is expected to come up with a bold and ambitious agenda for the LDC for the next ten years.