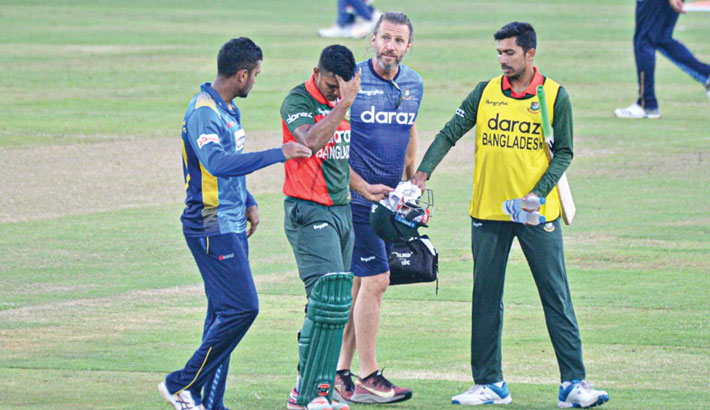 Bangladesh all-rounder Mohammad Saifuddin (second left) reacts to an injury during the second ODI match against Sri Lanka at the Sher-e-Bangla National Cricket Stadium in Dhaka on Tuesday. —TANVIN TAMIM

Bangladesh witnessed their first-ever concussion substitute at home after their all-rounder Mohammad Saifuddin was hit on his helmet and was being replaced by Taskin Ahmed during the second of three-match one-day international series against Sri Lanka in Dhaka on Tuesday.

The incident took place during the second ball of the 47th over of Bangladesh innings when Saifuddin failed to play a hook shot and the ball struck on his helmet off pacer Dushmantha Chameera.

Saifuddin looked unhinged after being hit but he tried to take a single and was run out at non-striker’s end by a fabulous throw of Kusal Perera after making 11 off 30 balls.

“He has shown signs of concussion and for his safety, Saifuddin is being substituted on the match by a like-for-like player Taskin Ahmed,” BCB informed through a statement during the innings break.

Earlier, Bangladesh were forced to name two concussion substitutes against India in a day during their first-ever pink ball Test when they had to replace Liton Das and Nayeem Hasan respectively with Mehidy Hasan and Taijul Islam in Kolkata in November 2019.

The first-ever concussion substitute after International Cricket Council’s rule came into effect was Australian Marnus Labuschagne as he replaced Steve Smith during the second Ashes Test at Lord’s in 2019 after the latter was struck by pacer Jofra Archer’s bouncer.