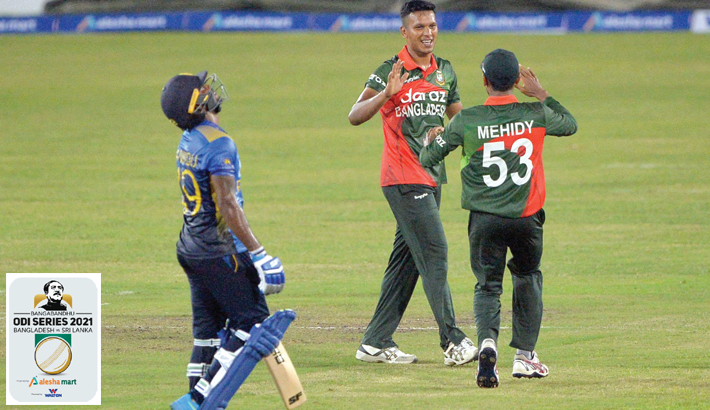 Bangladesh will be eyeing to clinch their maiden ODI series win over Sri Lanka when they take on the tourists in the second match of the ongoing three-match series at the Sher-e-Bangla National Stadium today.

The Tigers are currently 1-0 up in the series after winning the opening game by 33 runs that also ended their 10-match winless streak across format on Sunday.

The victory in the first match meant the hosts now have two opportunities to complete their first-ever ODI series win against the Sri Lankans, which they couldn’t do in their previous eight bilateral ODI series (six defeats, two draws).

However, doubts are hovering over the fate of the game as there is a high chance of rain interruptions in the second half of the game due to Cyclone Yaas, which is likely to intensify further and reach the coast of Orissa and West Bengal in India and Khulna in Bangladesh by Wednesday.

Bangladesh heaved a sigh of relief after Mustafizur Rahman, who sustained a cramp in the opening game, tweeted on Tuesday that he’s available for the crucial match that left behind all kind of doubts regarding his participation in the contest.

The Tigers are very likely to field the same winning team in the second match after outplaying the visitors in all three departments in the series opener.

However, the batting form of Liton Das and Mohammad Mithun still remained a matter of concern for Bangladesh team management which only amplified after both the batters got dismissed on a duck in the first match.

Bangladesh all-rounder Mohammad Saifuddin insisted they have to play as a unit to win the series and was satisfied with his first match performance.

“(I) was trying by heart, as Bangladesh needed a win so badly and I’m very happy that I was able to contribute even a little amount to it,” Saifuddin, who picked the most crucial wicket of the game, Wanindu Hasaranga, said.

“I know Hasaranga (Wanindu) quite a lot, as I’ve played against him in the Under-19 World Cup. He obviously batted well but picking him up while setting the appropriate field, satisfied me the most,” he added.

Meanwhile, middle-overs muddle with both bat and ball seems to be Sri Lanka’s biggest problem which they’ll be hoping to address in the second match and will be looking forward to making a comeback.

Bangladesh Chief Selector Minhajul Abedin told The Daily Sun that they can’t take the tourists lightly more so after the opening game where they had threatened to make an upset.

“They played quite well despite losing the game and they can be really dangerous on their day,” said Minhajul. “We must make sure that we tick all our boxes in order to earn the win,” he added.