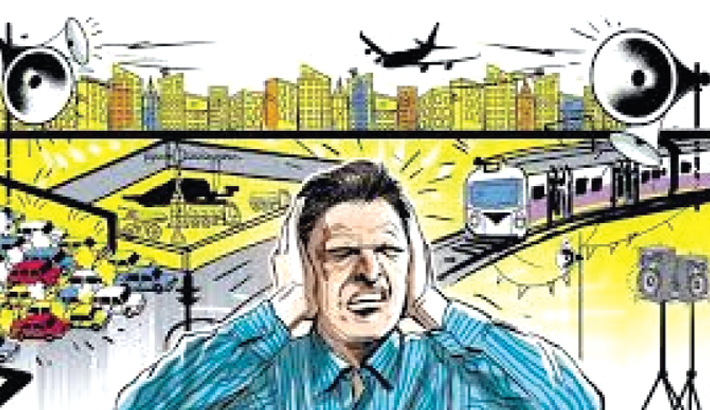 Individuals and organisations around the globe have celebrated the 26th Annual International Noise Awareness Day on April 28, 2021, with the theme "Protect Your Hearing, Protect Your Health!" aimed at raising awareness of the harmful effects of noise on hearing, health, and quality of life, and inspire positive action at the community and state level. Founded in 1996 by the Center for Hearing and Communication (CHC) the campaign has been taking place on the last Wednesday of April since 1996. Directorate of Environment (DoE), the Government of Bangladesh has also organised a virtual workshop celebrating the International Noise Awareness Day where the Minister for Environment, Forests and Climate Change Mohammad Shahab Uddin mentioned that Dhaka city has been suffering from sound pollution three times the tolerable level that put around half a crore people at health risk.

Human civilisation has been facing a severe and acute public health emergency due to the yearlong Covid-19 pandemic, which has exposed critical challenges for achieving the targets of Sustainable Development Goals (SDG) globally. Given the adversity of the Covid-19 pandemic, mobility of individuals, transports were limited, many industries, factories and offices are closed, but available reports suggest that even the pandemic has failed to quite Dhaka city.

Noise is unwanted sound and has been perceived as an over-loud or disturbing sound, which has a serious threat to the quality environment and thus have worst impact on human lives but with the development process, nowadays such noise has become an integral part of urban life and people living around industrial centers. There are multiple sources of noise mostly originated from loudspeakers, factories, and flights, moving vehicles, construction activity, or even a radio. A scientifically accepted level of noise is 80 decibel (dB) or more for more than 8 hours a day that increases tension and changes in breathing patterns.

WHO data shows that nearly 5% of the global population has been suffering from noise pollution while around 1.1 billion people at the age of 12-35 are at risk of hearing loss due to their involvement in excessively noisy recreational activities. According to 2017 study by the Directorate of Environment the sound levels, in every divisional city of Bangladesh, have surpassed their permitted limits while in some places, noise levels are double and sometimes triple than the allowable levels. The study revealed that around 11.7 percent of the population of Bangladesh has lost their hearing due to noise pollution. WHO has termed noise pollution as an underestimated threat that can cause hearing loss, cardiovascular problems, cognitive impairment, stress, and depression, etc. In managing noise pollution WHO, however, recommended three principles i.e. precautionary principle, polluter pays principle, prevention principle where implementation of sound reducing law is possible if the interconnected government policies are implemented in a coordinated manner.

The Noise Pollution (Control) Rules 2006 was formulated by the government of Bangladesh following Section 20 of the Bangladesh Environment Conservation Act 1995, which aimed at laying down the specific guidelines regarding noise pollution and the degree of allowable noise across the country. The Rule has clustered five types of areas named silent areas, residential areas, mixed areas, commercial areas, and industrial areas, and fixed the permitted noise levels applicable for both day and night-time except few exceptions. According to the definition cited in the Rule, Silent areas include hospitals, educational institutions, offices and similar establishments, and their surrounding 100-meter area. The Rule defines the silent areas as areas where the noise level is to be kept at the lowest (50 decibels at day and 40 decibels at night); the permitted noise level for residential areas is 55 decibels at day and 45 decibels at night. In industrial areas, where the highest noise levels are permitted, the limit is 75 decibels at day and 70 decibels at night. In the explanation of The Rule, it has been mentioned that hours between 6 am and 9 pm is considered as daytime while the remaining hours are considered as night-time. A separate range has been prescribed for vehicular noise under Schedule-2 of The Rule, and the use of horns is completely prohibited in areas identified as silent areas.

The Rule provisioned that in case of any social, cultural, or political events like weddings, sports, concerts, melas, hats, bazars, in open or partially open spaces, the sound level can be exceeded if permission is obtained three days before the event. In case of urgent situations, permissions can be sought one day in advance as well. However, no such permission will allow for such exceedance beyond five hours and in any case, the time can be extended only up to 10 pm. The Rule also states that no construction machines used to process and break down building materials (bricks, stones, etc.) shall be used within 500 meters of any residential areas and such types of machinery cannot be used between 7 pm and 7 am without the permission of the concerned authorities.

Provisions have been referred to The Rule that any person can contact the concerned authorities with any complaints regarding excessive noise or contravention of the Rule either verbally or over the phone or in writing, and it states that officials empowered under the 1995 Act can, in pursuance of the Rule, enter an establishment and confiscate any noise-producing instrument. Following The Rule the designated officials can issue a written direction for the violation of the prescribed limits, the non-compliance with which is an offence punishable with imprisonment up to 1 month and/or fine up to taka 5,000. If the person commits the offence in a repeated manner he/s may be imprisoned up to 6 months and/or fined up to taka 10,000.

But the survey conducted by the Directorate of Environment during 2017 reveals that the majority of the citizen irrespective of literate or illiterate, rich or poor are unaware of sound pollution rules and regulations though people on a large scale have been suffering from hearing problems caused by noise pollution. Majority of the population know very little about the standard of admissible level of noise and the existing Rule that regulate the levels. Besides, the affected people do not have any idea about the remedy or they do not have information about the authorities who they can lodge complaints to get rid of such unhealthy practices the study reveals.

Following the advancement of science and technology at an unprecedented pace, nowadays the urban centers across the globe have evolved not just in size but also in terms of the living conditions, which has brought about an increasing trend of awareness about noise pollution, which has become a part of our day-to-day lives. In legal terms, noise can be considered as an assault on an individual. Apparently, this is a potential hazard to the provisions of sound living conditions and needs to be checked at the planning, administrative and judicial level. Noise abatement law and policy can only be established and implemented successfully if basic knowledge and background material are available, and the mass people including the authorities/administration are aware that noise is an environmental hazard that needs to be controlled.

The writer is an environmental activist