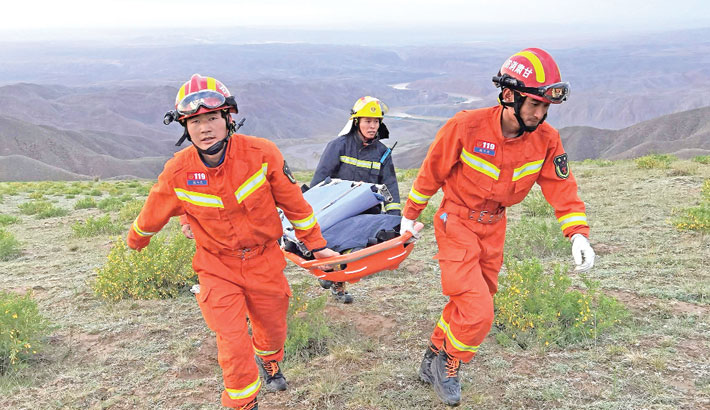 Rescuers are seen carrying equipment as they search for runners who were competing in a 100-kilometre cross-country mountain race when extreme weather hit the area, near the city of Baiyin in China’s northwestern Gansu province. – AFP PHOTO

Official news agency Xinhua confirmed that 21 of the 172 participants had died, citing the local rescue command headquarters. The other 151 are now safe, according to state media.

Baiyin city mayor Zhang Xuchen said that at around midday Saturday a section of the rugged ultramarathon course -- between kilometres 20 and 31 -- was "suddenly affected by disastrous weather".

"In a short period of time, hailstones and ice rain suddenly fell in the local area, and there were strong winds. The temperature sharply dropped," Zhang said.

At around 2 pm, weather conditions worsened and the race was called off, Zhang said.

Huang, who was deaf-mute, won the men's hearing-impaired marathon at the 2019 National Paralympic Games held in Tianjin.

Father-of-one Lu Zhengyi, who took part in several marathons, was also reported by local media as one of the victims.

"As the event's organiser, we feel a deep sense of guilt and self-blame, express our deep mourning for the victims and deep condolences to their families and the injured runners," Zhang said.

The race, backed by the Baiyin city government and the Chinese Athletic Association, has been held for four successive years.