Review of Still We Sing: Voices on Violence Against Women 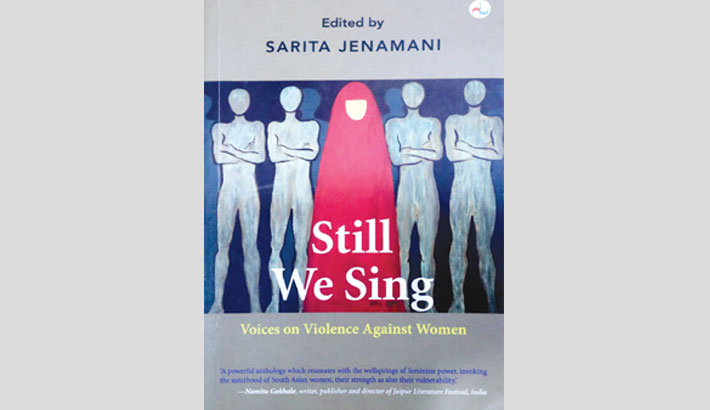 I open the book on a random page and a mother calls me daughter. She calls me to sit with her and tells me on a day like this her mother called her too. They sat in the bed and she expected to be shown some jewel-studded heirloom. But my nani had nothing but scars to show, two marks to carry for small defiance. Now mother tells me that she has no scars to show, but the ones in her heart. She asks me to look for them in her eyes. She tells me by this time tomorrow, I will be married. Mother warns me of the sadness and loneliness with all the joy that is to come. She says, “Remember, if we could come out of it, So will you.”

‘My Mother’s Wound’ by Sakoon Singh is one of the many poems in the anthology ‘Still We Sing: Voices on Violence Against Women’ that drew me in and pushed me into a reality that I often try to escape. Sarita Jenamani, the editor of this phenomenal collection, says it best. “This is not an anthology of feminist poetry. This is a book that is home to all women voices rendered silent by the vicious trinity of oppression, denial and victim-bashing”. It is unflinching in its defiance and paints the bleak reality for women under an intensely patriarchic system. The idea for this collection came to Jenamani while writing a paper about the literary responses to violence against women in South Asia for PEN Austria. While researching for this paper she could not find any anthology of prose or poem that addressed the issue directly. So, she set out to amend that herself through bringing together poetry from over 70 female poets of Bangladesh, India, Pakistan, Nepal and Sri Lanka in this heart-wrenching collection.

Gender-based violence has gone up significantly in the past year even as the world paused to recover from the covid-19 pandemic. It is a horrifying truth every woman carries as they move through the world. But it is also a truth that cannot be said out loud for fear of being seen as more woman than a person. As someone just crossing the threshold to womanhood, I find this collection intensely moving. My generation is still in the process of creating a new kind of woman for the new era we are to inherit. But as we stand here, we are haunted by the ghost of womanhood past. This collection gives voice that to that ghost. Each poem stands as an act of rebellion to system that strives to keep victims quiet and reminds the readers of the truth that will not be ignored.

Aysha Jhorna in her poem ‘Owl with an Evil Sign’ writes,

“How long can one carry on

Or holding this staying apart

From sounds of hasty wind or the water resources!”

This collection’s razor focus on the women of South Asia is also something of note. Too often the experiences of Bangladeshi girls who grew up in small villages are lost in the broad strokes of global feminist dialogue. But our culture is communicated differently. Our empowerment looks different from the empowerment of our sisters in other parts of the world. ‘Still We Sing’, in contrast, is determined to reflect our part of the story. Many of the poems featured in this collection rely on South Asian folklores, mythology and imagery specific to our cultural context.

Shahnaz Munni, in her poem ‘At the Feet of Cruel Beauty’ writes,

“Two fruits of God are hanging

In that tree—womanhood and motherhood

Near the feet of men’s cruel beauty.”

We harp on and on about the resilience and inner strength of women. But women have never been given an option to not be strong. The onslaught of violence has never given anyone reprieve. In her poem, Munni mourns the battered state of the female body in the face of a force that has never been benign. Like this one, most poems in this anthology are not comforting. They do not coddle readers by pretending that the strength of women will let us weather the storm. Instead, there is rage in the face of injustice. The collective voice of the poets in this collection demands that we look at the unchanged reality. By amplifying the voices that speak of womanhood in the face of violence, ‘Still We Sing’ demands a future where women’s voices soar without restraint.