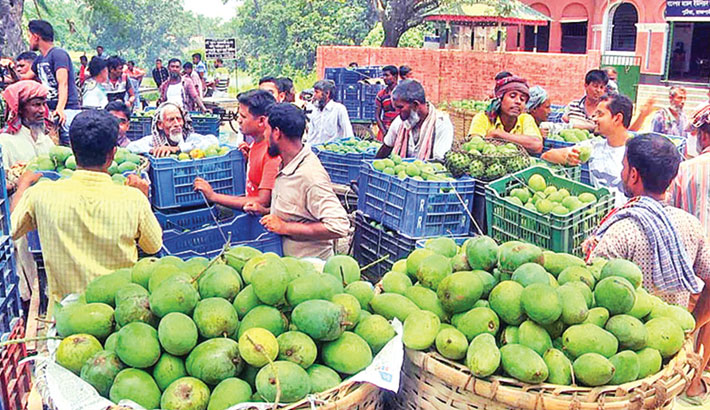 RAJSHAHI: Mango trading has started getting vibrant amid arrival of many of the indigenous along with some branded varieties in both wholesale and retail markets in Rajshahi, Chapainawabganj and Naogaon, the three districts famous for mango production.

‘Gopal Bhog’, one of the delicious and mouth-watering mango varieties, has started appearing in the markets since Thursday morning, abiding by the instruction of local administration amid the COVID-19 pandemic, reports BSS.

Farmers and traders have started harvesting the variety since this morning following the instruction of local administration.

District administration had taken the decision to prevent adulteration in the mango ripening process.

According to the administrative decision, the farmers can pluck local varieties from May 15 while harvest of Gopal Bhog mangoes will commence on May 20 and Laxmanbhog, Laukhna and Ranipasand varieties will start on May 25.

Officials of the Department of Agricultural Extension (DAE) said mango was cultivated on 26,150 hectares of areas in Rajshahi and Chapainawabganj districts where it’s expected to yield 2,44,000 tonnes of mangoes this year.

Abdul Awal, Deputy Director of DAE, told BSS that most of the mangoes will become mature and ripen within the stipulated time and then those could be harvested normally.

He said some of the indigenous varieties of mangoes have already ripened. But the other delicious and famous varieties- Khirshapat and Langra need some more days to be ripened.

The West Zone of Bangladesh Railway is going to launch a ‘special mango train’ on Chapainawabganj-Dhaka route via Rajshahi from May 25 next for the second consecutive time.

Nasir Uddin, Divisional Commercial Manager of the zone, said they have taken the decision of transporting mango to Dhaka from this mango producing area for the benefit of the growers and traders.

He said the initiative has also been taken to transport mangoes at a lower cost for welfare of the mango traders and farmers amid the Covid-19 pandemic situation.

Rajshahi and Chapai- nawabganj districts, nationwide famous for mango production, have set the target to export 300 tonnes of mango to different European and Middle East countries during the current harvesting season.

President of Rajshahi Agro Food Producer Society Anwarul Haque said mangoes produced in Rajshahi are being exported to various European and many other countries every year for the last couple of years, which is good news for Rajshahi people.