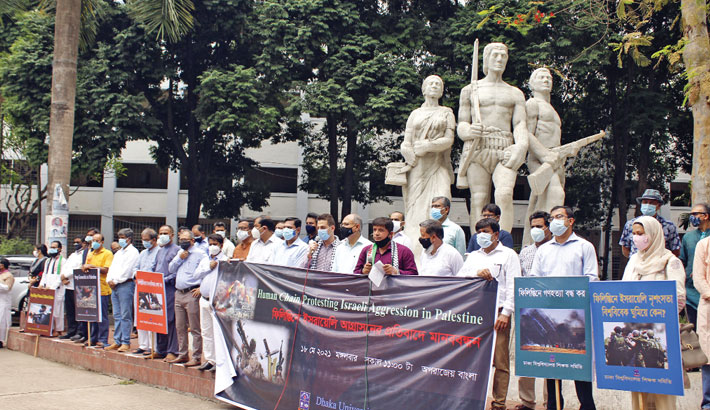 Dhaka University Teachers' Association forms a human chain to protest against the ongoing Israeli aggression, genocide and destruction in Palestine at the foot of Aparajeyo Bangla on the university campus on Tuesday. —SUN PHOTO

The protest was staged forming a human chain at the foot of Aparajeyo Bangla on Dhaka University (DU) campus on Tuesday.

During the protest DU teachers were seen holding placards reading ‘Stop genocide in Palestine’, ‘Save humanity in Palestine‘, ‘Stop killing women and children in Palestine’.

DU VC Prof Dr Md Akhtaruzzaman said that Palestinians had been deceived through the establishment of the state of Israel in 1948.

“Although Israel was recognised then, Palestine was not. They were deceived for the second time in 1967.And in each of these cases, the Palestinians lost their lands and lives.”