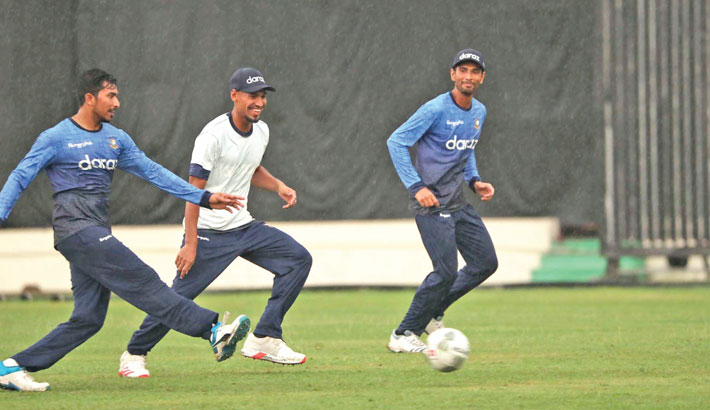 (From left to right) Bangladesh cricketers Soumya Sarkar, Mustafizur Rahman and Mahmudullah play football during a training session at the Sher-e-Bangla National Stadium in the capital on Tuesday. – BCB PHOTO

Bangladesh all-rounder Shakib Al Hasan and pacer Mustafizur Rahman joined their national team-mates as the Tigers officially resumed their practice session after Eid break for the upcoming one-day international series against Sri Lanka at the Sher-e-Bangla National Stadium on Tuesday.

However, Bangladesh team couldn't hone their skills due to heavy downpour in the afternoon at the home of cricket in the capital.

Bangladesh were scheduled to start their practice under floodlight and the squad members even came out for warm-up with football but they were forced to go back to the dressing room after a while as incessant rain started.

Bangladesh Cricket Board officials informed that all the members of the squad reported on the same day ahead of the series slated at the SBNS respectively on May 23, 25 and 28.

Bangladesh team management called leg-spinner Aminul Islam for the practice game and he was also seen with the members of the preliminary squad on Tuesday.

Bangladesh Chief Selector Minhajul Abedin believed that the preparation of Shakib and Mustafizur won’t be hampered to large extent despite losing a crucial practice session.

Both of them came out after nearly 17 days of layoff as they stayed inside their hotel for the last five days of IPL after its postponement in India and 12 days at institutional quarantine in Dhaka.

“I don’t think that they are away from cricket for a long time as they have taken part in IPL,” Minhajul told The Daily Sun, adding that a chilling mood was prevailing in the dressing room.

“They were indeed in quarantine but with the amount of experience they have, they won’t take time to get back into the business. They are going to take part in the practice game and I hope it will be sufficient for them along with the few days they will have for skill training,” he added.

Earlier, Shakib and Mustafizur returned home from India on May 6 after taking part in the Indian Premier League.

Both the cricketers came out Covid-19 negative in multiple tests over the last few weeks and finally joined their team-mates to the team’s bio-bubble for Sri Lanka series from their hotel quarantine.

“The directive that they must practise while staying in a bio-bubble environment still stands. They are practicing while within the bio-bubble. This is not a special consideration. They have shifted from their hotel quarantine to the team's bio-bubble,” BCB Chief Executive Officer Nizamuddin Chowdhury said.

Shakib and Mustafizur represented Kolkata Knight Riders and Rajasthan Royals respectively in the 14th edition of the cash-rich competition, which was suspended midway amid the rise of the coronavirus cases in India.

They reached Dhaka early through a special arrangement as all air travel was suspended between India and Bangladesh.

Mustafizur, on the other hand, played all seven matches for Rajasthan and took eight wickets for his side.

Sri Lanka team arrived in the city on Sunday and they will start their practise on Wednesday after completing their three-day quarantine in a city hotel.