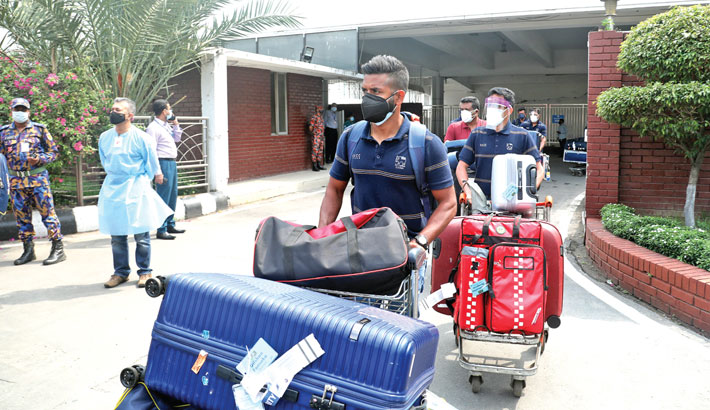 Sri Lanka cricketers are coming out of the airport in the capital on Sunday to take part in the three-match one-day international series against hosts Bangladesh. — BCB PHOTO

An 18-member Sri Lanka squad led by Kusal Perera arrived in Dhaka on Sunday to take part in the three-match one-day international series against hosts Bangladesh, scheduled to start on May 23.

Sri Lanka squad will complete three-day quarantine until May 18 before they start their practice at National Cricket Academy on May 19.

The visitors are scheduled to play an intra-squad practice match at the BKSP on May 21 before they take on the hosts in the first ODI on May 23 at the Sher-e-Bangla National Stadium in the capital. The remaining two ODIs of the three-match series which is also a part of the ICC World Cup Super League will take place on May 25 and 28 respectively under a strict bio-bubble environment.

Sri Lanka came to Dhaka with a relatively young side as they overlooked senior campaigners like Dimuth Karunaratne, Angelo Mathews, Lahiru Thirimanne and Dinesh Chandimal while keeping their eyes on the 2023 ICC World Cup. Perera, who replaced Karunaratne as their new ODI skipper said that he had full confidence in the cricketers as all are experienced at the domestic level. “We are a very good team you know. A lot of young players are in there. As they are very experienced in first-class cricket and have played a lot of first-class cricket so I’m hoping to better Bangladesh,” Perera said.

Perera added that they have to play fearless cricket to do well against the hosts in the series.

“We have to play fearless cricket to win matches. You can't be fearful about losing. If you're worried about your place, you aren't going to give 100 percent,” he said.

“What I'm going to tell the players is to go and give it everything. If we play fearlessly even when we are practising, then you will be able to play the same way in a match. That's what I've told the team. If we are fearful, we will fall even further. I'm trying to build a culture where the players have a lot of confidence,” he added.

Sri Lankan head coach Mickey Arthur echoed the same sentiment while he added that door is not entirely shut for the seniors.

“Both I and the selectors thought that we needed to pull something sustainable and we needed to have a look until 2023. We needed to pull key areas, we selected a squad that is very exciting and there are some young players that are trying to find their mark in international cricket,” said Arthur.

“We have some seasoned performers as well and the key for me is to see how these will go and how they will fit into the brand of cricket that we want to play, to take this team forward, to ultimately have some success.

“Absolutely not, the door is not closed for any individual, we thought we need to look to some younger talents to see how they fit into the game plan that we wanted to take forward, but I’ve been enough time in the game to know that the door never shuts on any cricketer, because any cricketer can make a comeback, and one must, you know, we have to consider that Angelo (Mathews) is still very young, so is Dimuth (Karunaratne) and also Chandi (Dinesh Chandimal).

“And we’ll answer some questions in Bangladesh, we’ve had a tough tour in England, and then we went to India. So, it doesn’t get any easier for us as a team, but what is clear for me is that we need to pull up a young team that can have sustainable success, can bring that sustainable success to Sri Lanka, and that’s where all our energy is going at the moment, so these guys are right at the crack, and it will be good to see how it goes,” he added.