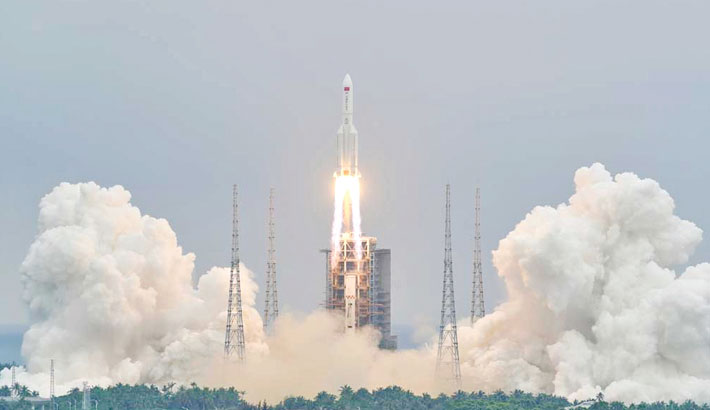 The vehicle used a combination of a protective capsule, a parachute and a rocket platform to make the descent.

The successful touchdown is a remarkable achievement, given the difficult nature of the task. Only the Americans have really mastered landing on Mars until now. All other countries that have tried have either crashed or lost contact soon after reaching the surface.

Chinese President Xi Jinping congratulated the mission team on its “outstanding achievement” in a special message.

“You were brave enough for the challenge, pursued excellence and placed our country in the advanced ranks of planetary exploration,” he said.

Thomas Zurbuchen, the head of science at the US space agency (Nasa), was quick also to add his own congratulations.

“Together with the global science community, I look forward to the important contributions this mission will make to humanity’s understanding of the Red Planet,” he said.

The Russian space agency, Roscosmos, said the success augured well for its future cooperation with China.

The robot officially landed shortly after 07:00 on Saturday, Beijing time (Friday 23:00 GMT), according to state media.

It took 17 minutes to unfold its solar panels and send a signal back to Earth.

Zhurong, which means God of Fire, was carried to Mars on the Tianwen-1 orbiter, which arrived above the planet in February.

The probe then spent time surveying Utopia, taking high-resolution images to pinpoint the safest place to put the rover down.

The aim with all such ventures is to pick a spot that is devoid of imposing craters and where the landscape isn’t covered in large boulders.

Chinese engineers would have had to follow the landing effort with a time lag.

Every stage of the Zhurong robot’s approach to the surface therefore would have been conducted autonomously.

The landing architecture was a familiar one.

The rover was encased in an aeroshell for the initial phase of the nine-minute descent. This capsule’s dive to the surface was slowed by pushing up against the Martian air.

The heat this generated was managed by a forward-facing shield.

At a predetermined time, a parachute opened to reduce the velocity still further.

Finally, the Zhurong robot broke away on a rocket-powered bench for the manoeuvres that took it safely to the ground.

Landing on Mars is always a daunting challenge but China would have had confidence going into the procedure, given the great competence it has shown in its space endeavours of late.

This is a nation that has been putting rovers on the Moon, and bringing lunar samples back to Earth. This month it launched the first segment of a space station above our planet.