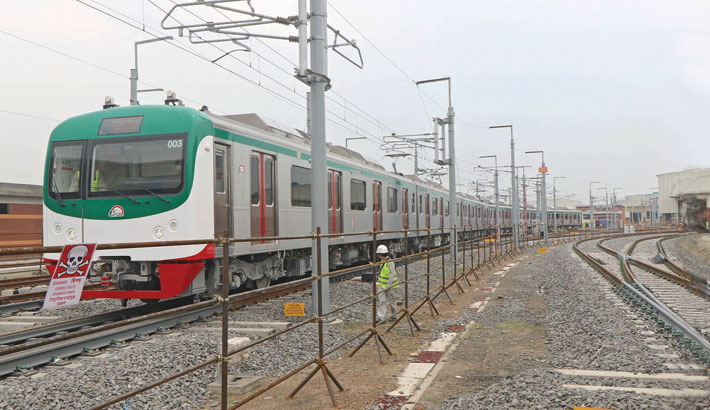 A test run of Dhaka Metro Rail is carried out in Uttara depot area in the capital on Tuesday as part of the performance test of the first set of trains imported from Japan. – Md nasir uddin

A test run of much-talked-about Dhaka Metro Rail was carried out inside Uttara’s depot area in the capital on Tuesday as part of performance test of the first set of metro trains imported from Japan.

“Metrorail is not a dream now, it is now a reality. Another set of trains has already reached Monla port,” Road Transport and Bridges Minister Obaidul Quder said while virtually inaugurating the test run of the metro rail.

The first set of the metro trains six coaches, including two locomotives, arrived at the metro rail depot workshop at Uttara in Dhaka from Japan on April 23.

Earlier on March 31, the first set of metro train arrived at Mongla port from Japan’s Kobe port and later they were carried to Dhaka through river routes.

Before the test run, the trains went through a static test and then were connected to electrical system to operate in the stabling yard for conducting other tests.

People will be able to see movement of the metro train on the viaduct in August, when it will go through another performance test following completion of its test run on the test track, Quader said.

A joint venture of Japanese automobile giants Kawasaki and Mitshubishi will manufacture a total of 24 such train sets for MRT-6 project being implemented in over 20km Uttara-Motijheel route.

The consortium started manufacturing the rolling stock in April 2019 under a Tk 28.70 billion deal signed in 2017. The first metro train set was ready in April last year and the second one in September.

Reusable aluminium alloy has been used to build the bodies of the compartments and the window glasses have been made bulletproof.

The compartments weighing 22-28 tonnes are about three metres in width and 20 metres in length, and have a long-line seating arrangement.

Each of the coaches will have two air-conditioning units, with four doors for passengers.

The train will run at a maximum speed of 100km per hour, although it was run at 5km speed during the test run. It has regenerative electric brakes facility.

The metro trains will be operated using an automated radio communication system, enabling it to be operated without any driver.

So far, installation of seven-kilometre rail track has already been complete. Electrical and mechanical work and construction of side walls on either side of the viaduct are underway.

A total of 13.80 kilometres of the viaduct has so far been installed. The rail track installation inside the depot has also been complete.

The government had a plan to start Uttara-Agargaon segment’ operation in December this year, but the second spell of virus attack has made it uncertain.