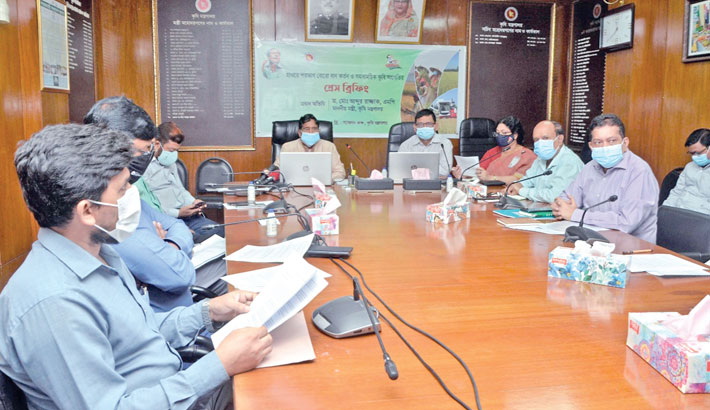 Agriculture Minister Dr M Abdur Razzaque exchanges views on contemporary situation of agriculture at his secretariat office in the capital on Tuesday.

He said paddy harvest has already been completed in the Haor regions. The overall progress is 64 per cent across the country and harvest of the rest of the paddy will be completed by this month, the minister informed.

The minister made the remarks while exchanging views with reporters on “Boro Paddy Production Situation and Contemporary Issues in Agriculture” at the Agriculture Ministry’s conference room.

Expressing satisfaction over the Boro harvest progress in the haor region, the agriculture minister said, “Boro has been cultivated on 9, 46,534 hectares of land in seven districts in the haor regions this year. This makes up 20 per cent of the total Boro cultivation in the country.”

“It was possible to harvest paddy quickly this year as a result of providing harvesting machines and facilitating the timely movement of workers under the government’s supervision,” he said, adding that only 33 per cent of the country's paddy was harvested on the same date last year.

Nearly 50,000 workers have been brought in only for seven districts of Haor this year. In addition, 2,620 combine harvesters and 789 reapers are operating on the field, Abdur Razzaque informed.

“Every year it has taken on a new dimension in alleviating the suffering of the farmers. Despite the labour crisis, paddy is being harvested quickly and farmers are benefiting from the reduction in production costs,” said the minister.

“The target is to produce 2.5 crore metric tonnes of rice in the boro season this year. The production was 1.96 crore last year. Now it is expected that there will be no further impact on Boro paddy production this year if no natural calamity strikes. Production will be at least 10 lakh tonnes more than last year,” the agriculture minister said.