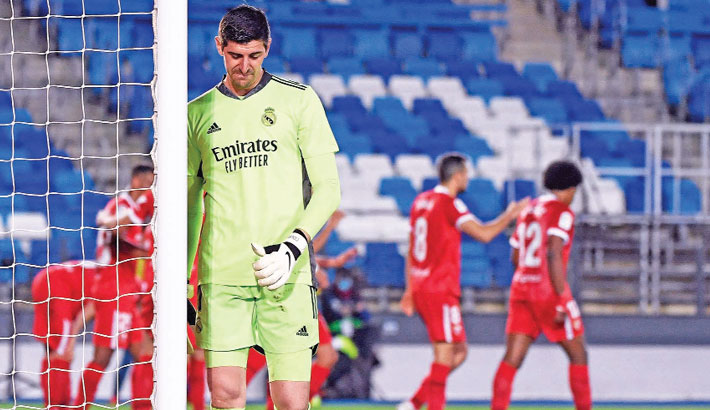 Zinedine Zidane's side had levelled through Marco Asensio midway through the second half and thought they had a penalty when Karim Benzema was brought down after rounding Sevilla goalkeeper Yassine Bono.

But VAR prompted referee Juan Martinez Munuera to check an Eder Militao handball a few seconds before, with a huge decision seeing Madrid's penalty cancelled and a spot-kick awarded to Sevilla instead.

Ivan Rakitic converted and while Madrid still managed to hit back in injury time, Toni Kroos' shot deflecting in off Eden Hazard's foot, the draw hands the advantage back to Atletico at the end of another dramatic weekend in the Spanish title race.

After Barcelona and Atletico played out a goalless draw on Saturday at Camp Nou, the second instalment of La Liga's blockbuster weekend also finished honours even, meaning the situation at the top is unchanged with three games now remaining.

Atletico are two points clear of both Real Madrid and Barcelona, with the title very much back in their hands.

Meanwhile, Neymar was on target the day after signing his contract extension but Paris Saint-Germain were held to a 1-1 draw at Rennes on Sunday that leaves Lille a step closer to a remarkable Ligue 1 title triumph.

PSG led at half-time after Neymar converted a controversial penalty award, but they were pegged back in the second half as Serhou Guirassy headed in the equaliser.

Presnel Kimpembe was later sent off for Mauricio Pochettino's side, who could not get back to winning ways on their return to domestic action following their Champions League semi-final exit against Manchester City.

PSG are now three points adrift of Ligue 1 leaders Lille, who know they will be champions for the first time since 2011 by taking four points from their remaining two matches of the season.

AC Milan pushed Juventus out of the Serie A top four with a 3-0 win in Turin on Sunday which increases their hopes of Champions League football for the first time since 2014.

Brahim Diaz put Milan ahead just before the break with Anton Rebic and Fikayo Tomori adding two more in the second half after Franck Kessie had missed a penalty.

Milan move up to third, equal on 72 points with second-placed Atalanta, with Napoli a further two points behind in fourth and the final Champions League berth.

Juventus are now fifth, one point behind the top four with three games left to play, including next weekend's clash with newly-crowned champions Inter Milan.