Importance of Laylatul Qadr and I’tikaf 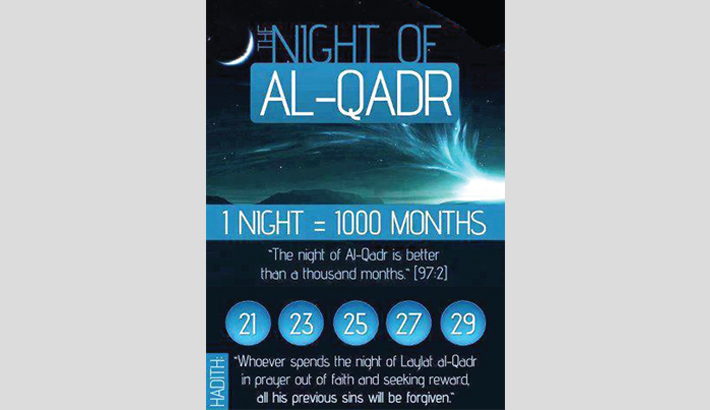 The significance of Laylatul Qadr is such that Allah (SWT) revealed a complete Surah in order to emphasis on the greatness of it. He says: “Indeed, We sent the Qur’an down during the Night of Decree. And what can make you know what is the Night of Decree? The Night of Decree is better than a thousand months. The angels and the Spirit descend therein by permission of their Lord for every matter. Peace it is until the emergence of dawn.” (Sura Al-Qadr: 1-5).

Duwa (supplication) on this night has the great significance. There is a special Duwa (supplication) that can be recitedon LaylatulQadr which the Prophet (PBUH) taught us. Aa’ishah (RA.) said: “I said, ‘O Messenger of Allah, if I know which night is LaylatulQadr, what should I say on that night?’ The messenger of Allah replied, ‘Say: Allaahummainnaka ‘afuwwuntuhibbulafwafa’affu ‘anni (O Allaah, You are forgiving and You love forgiveness, so forgive me).”

The best way of catching Laylatul Qadr is to remain in I’tikaf. Because, staying in the Mosque all this time, like performing extra Salat and recitation of the Qur’an. I’tikaf means confinement to a specific thing or place or isolating oneself. According to Islamic Shariyah, it is staying in a mosque (where the five times daily prayers are held) with the intention of worship for a certain number of days and nights. The messenger of Allah (PBUH) used to perform I’tikaf in every Ramadan. I’tikaaf gets superiority over other methods of worship because it encompasses many other forms of worship within itself. Whoever performs I’tikaf, he gets reward for the pious deeds committed by other people as well. Ibn Abbas t relates that the Messenger of Allah (PBUH) said, "The person performing Itikaaf remains free from sins and he is indeed given the same reward as those who do good deeds (in spite of not having done these deeds). (Ibn Majah). One who observes the 10 days I’tikaf in Ramadan he will get the reward of performing two Hajj and two Umrahs. The Prophet (PBUH) said:“He who observes the ten days’ I’tikaf during Ramadan will obtain the reward of two Hajj and two Umrah.” (Bayhaqi).

The writer is a national award winner Qari and Kahtib of Baitush Shafiq Mosque (near National Univesity), Gazipur