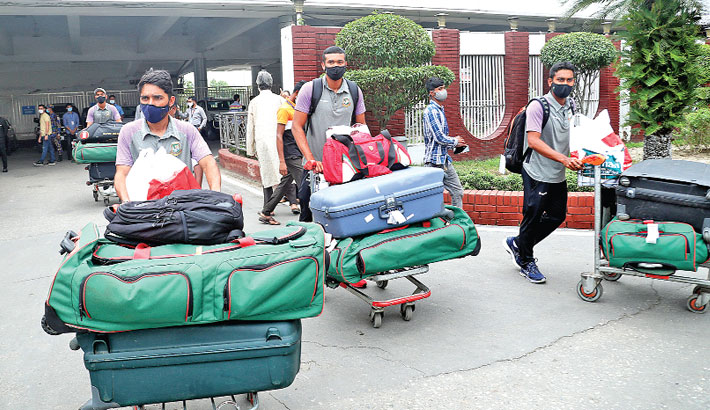 (From left to right) Bangladesh Test skipper Mominul Haque, Taskin Ahmed and Mehidy Hasan are coming out of the airport in the capital on Tuesday after losing Test series against Sri Lanka. — BCB PHOTO

Bangladesh national cricket team returned home on Tuesday a day after completing a disappointing tour against Sri Lanka where they lost the two-match Test series by a 0-1 margin.

The team arrived at 3:45pm on a special flight at the Hazrat Shahjalal International Airport in the capital.

Head coach Russell Domingo and fielding coach Ryan Cook, who were expected to return to South Africa and later joined the team ahead of the three-match ODI series against Sri Lanka, also had to change their plan and return with the team due to the new Covid protocol in place.

As per a new quarantine rule, which came into effect on May 1, foreign travelers coming from India and South Africa will have to go through 14-day quarantine before resuming work in the country. BCB will need special permission from the Directorate General of Health Services to avail any relaxation on that.

It is understood BCB is unable to manage any relaxation in this regard unlike in the past. The players are expected to complete a three-day quarantine room at home before resuming daily activities.

A 21-member Bangladesh squad had left for Sri Lanka on April 12 to play two Test matches against the Lankans at their own den.

Bangladesh had drawn the opening Test while lost the second game by 209 runs to lose the series by a 0-1 margin.

However, Bangladesh head coach Russell Domingo said that he is not too bothered with all the criticism going around regarding his performance as head coach.

“I am not really concerned about the future as the head coach with the team. I’m enjoying working with the players. I’m enjoying the setup,” Domingo said.

“There will always be question marks when you lose a series at home. We have to deal with them and make sure we prepare well before the series against Sri Lanka. It's important to learn from the past and focus on the future,” he said.