Lockdown extended until May 16 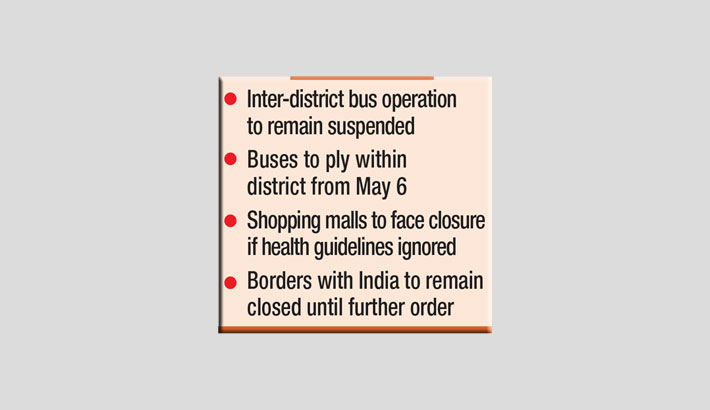 The government has extended the ongoing lockdown till May 16, banning operations of inter-district bus service ahead of the Eid-ul-Fitr to contain the further spread of coronavirus in the country.

“The government has decided to extend the ongoing restrictions till May 16. Operations of inter-district bus services will remain suspended,” Cabinet Secretary Khandker Anwarul Islam said this while briefing reporters after a regular Cabinet meeting on Monday.

As per the decision, public transport will be allowed to ply within the district from May 6, but inter-district bus services will remain suspended.

Besides, train and launch services will remain suspended during the extended period of lockdown and the border with the neighbouring India will remain closed until new announcement from the government.

The government has decided to extend the lockdown further as the country’s coronavirus situation is still alarming. Sixty-five people died and 1,739 new infections were recorded in the last 24-hour till Monday.

Talking over whether the decision would mount the sufferings of homebound people, including garment workers, during the upcoming Eid, the cabinet secretary said no additional leave will be allowed during the Eid except three-day public holiday. The Eid is likely to be celebrated on May 14.

The cabinet secretary also hinted at taking ‘stern action’ to ensure use of facemask.

“Police, city corporations and local administration will supervise it every shopping malls across the country from Monday,” he said.

“Although crowd could not be controlled, shopping malls will be shut down if people are seen without masks in the markets. Shop owners associations have assured that they will assist in this regard,” he added.

Alongside all the emergency services, government and private offices would remain out of the purview while factories will be in operation maintaining health guidelines.

Earlier, the government imposed an apparently loose nationwide lockdown for one week from April 5 as the coronavirus cases continue to rise alarmingly from late March.

But the government allowed the resumption of public transport in city corporation areas from April 7 as well as reopening of shops and shopping malls for five days from April 9 in the face of protests against the lockdown. The apparently relaxed lockdown further extended by two more days till April 13.

As per the suggestion of the health experts, the government enforced stricter lockdown from April 14 to April 22.

Later, another gazette notification was issued to extend the ongoing lockdown by another week till April 28. As the Covid-19 situation in neighbouring India has taken a serious turn, the government closed the border with India for 14 days from April 26.

However, the government allowed shops and shopping malls to open from April 25 taking life and livelihood into cognizance.

Later, the government extended lockdown by another week till May 5.