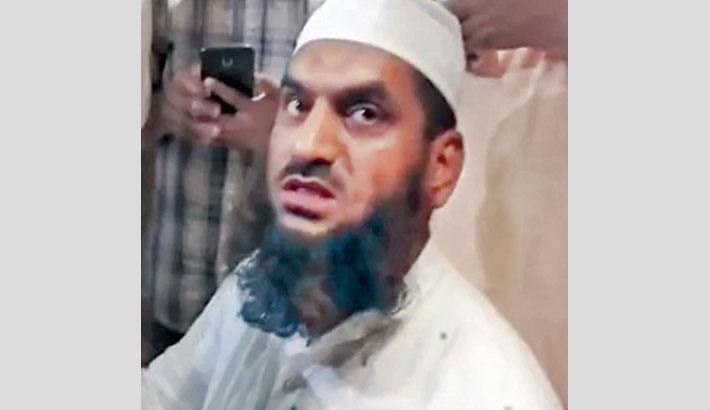 The so-called second wife of Hefajat-e-Islam Joint Secretary General Mamunul Haque filed a rape case against him with Sonargaon Police Station in Narayanganj on Friday.

The Hefajat leader will be shown arrested in this fresh case, police said.

He is now on police remand in other cases filed against him earlier.

Jannatul Islam Jharna, whom Mamunul had earlier claimed to be his ‘second wife’, filed the case against

According to the case statement, Jharna was forcibly kept at the homes of acquaintances of Mamunul after the resort scandal.

Mamunul even detained Jharna and had sex with her several times against her will, the case statement said, adding that she was also not allowed to communicate with her parents at that time.

Mamunul Haque was also the mastermind of breaking up the family with her first husband Shahidul, she said in the case statement.

The Hefajat leader was arrested from Dhaka in another case on April 18.

On April 18, Mamunul was brought to the office of Tejgaon deputy police commissioner after he was arrested from Jamia Rahmania Arabia Madrasa in Mohammadpur.

In the face of police interrogation, Mamunul disclosed that he has three wives amid speculation surrounding his marital status. But only one of the marriages has been registered in line with Muslim family law, according to Harun-ur-Rashid, deputy commissioner of Tejgaon Division.

Mamunul has been under the spotlight after being detained with a woman, who he claimed is his second wife, at a resort in Narayanganj's Sonargaon on April 3.

Apart from his alleged links to various incidents of vandalism and violence, he also attracted scrutiny over his multiple wives.

The hardline Islamist leader was arrested after investigators found clear evidence of his involvement in the incident, said Harun Ur Rashid, Tejgaon division deputy commissioner.

During interrogation, Mamunul told police that he used to spend more time with his younger wife but he did not say when they got married.

In a general diary filed with Mohammadpur police on April 11, a man named Shahjahan from Gazipur said Mamunul had called him over to Jamia Rahmania Arabia Madrasa on April 10 and told him that he had married his sister Lipi, according to the police official.

At the time, Lipi said she was staying with a woman named Dilruba at her house in Mohammadpur, Shahjahan stated in the GD.

Mamunul, joint secretary general of the radical group, was known for his hate speech and aggressive sermons in religious congregations and on social media, enjoying popularity among hardliners.