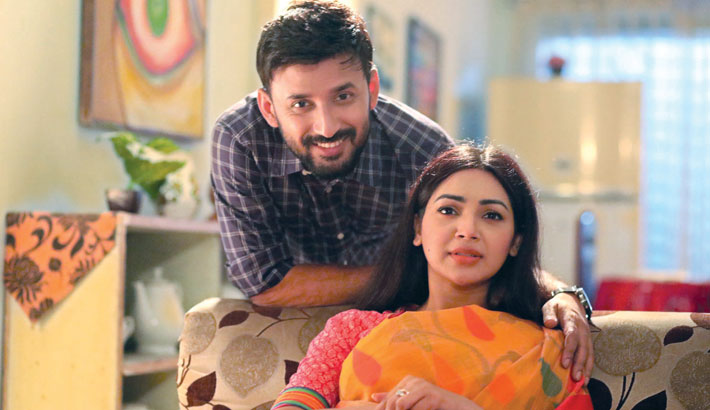 A scene from the drama Fake Husband.

Popular actors Sadia Jahan Prova and Monoj Pramanik have paired up for a new drama titled ‘Fake Husband’. Written by Anamika Mandal and directed by Mithu Roy, the play has been made for the upcoming Eid-ul-Fitr festival.

The shooting of the drama has already been completed at a location in the capital’s Uttara area recently, said a press release.

Monoj Pramanik will be seen as Prova’s fake husband in the drama.

The story of the drama revolves around a bachelor woman named Rooney. She works for a private company in Dhaka and lives alone. But, it is difficult to get a house for Bachelor woman as people make various comments and even at work place, colleagues try to take advantage.

So, Rooney decides to tell everyone she is married. As a result, she tells everyone that she got married. Since then, many of her previous problems have been solved. Thus, she continues her days. After some days, she got into a trouble with this married identity. The owner of Rooney’s house enquires about her husband. In the same time, her colleague Robin asks Ronney to introduce him to her husband.

One day, Rooney invites Robin to her house and Robin also comes to her house and waits for Rooney’s husband for long time. At a moment Robin asks Rooney when your husband will come. Rooney says he will return house in the midnight for his official job. Then, Robin leaves Rooney’s house after waiting. But, the house owner seems that Robin is Rooney’s husband. In this way, the story of the drama goes.

Prova has played the role of Rooney while Monoj Pramanik portrayed as Robin in the play.

According to the producer, the drama will be aired on a private television channel on the coming Eid.