No approval is taken from BSTI, BUET, BPC 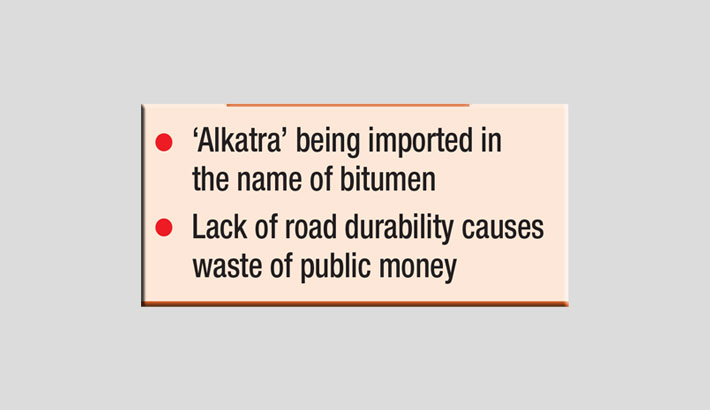 Nagaon-Badalgachhi-Patnitala highway got dilapidated even before finishing its development work. Parts of the roads were damaged while other parts became bumpy. In engineering, it is called ‘Undulation’.

The project’s Tk 65 crore went in vain just within a year just due to the use of low-quality bitumen. It is a story of a local highway from 2017.

To dig out the real reason behind the early breakdown of the highways, the Roads and Highways Department surveyed 18 roads. The survey found an ‘undulation’ problem in those roads.

Experts think that the undulation problem happens due to faulty construction, especially the use of low-quality and adulterated bitumen.

They suggested increasing monitoring of the construction work alongside ensuring the use of quality bitumen for sustainable road development.

Bangladesh has a demand for five lakh metric tonnes of bitumen annually. Of the total demand, ERL supplies 70,000 tonnes and the rest is imported from Middle East countries.

In an investigation, adulterated bitumen with half bitumen and half turpentine (turpin) has flooded the local market, and the supply is controlled by a syndicate.

Low-quality and adulterated bitumen is entering the country without the approval of Bangladesh Standards & Testing Institution (BSTI), Bangladesh Petroleum Corporation (BPC) and Bangladesh University of Engineering and Technology (BUET). Due to this fact, importers do not have to face any sort of scrutiny and end up importing low-quality bitumen.

In the contrary, locally made bitumen has to go through series of tests. Even after passing all sorts of tests, they are being discouraged.

Visiting several areas, it was seen that many roads in 45 districts across the country are in dire condition. Some 60-70 percent of the roads got dilapidated within one year of their construction due to the use of low-quality bitumen.

Islamic University of Technology (IUT) assistant professor and bitumen expert Dr Nazmus Sakib said it is seen that stones get separated from bitumen in most cases. The main reason for this is low-quality bitumen.

First of all, imported bitumen kept for long in ships and nobody knows about the source of its production. As a result, the quality of this product varies a lot.

Some road and highway engineers, who did not want to be named, said overloading and use of low-quality bitumen are responsible for the undulation. They said 60 to 70 grade bitumen is the best for road construction. Officials at the Eastern Refinery said most of the bitumen imported is of 80 to 100 grades, which is very low.

The bitumen supplied from Eastern Refinery and the bitumen of a privately produced company in the country is of 60 to 70 grade, which has been confirmed in the BSTI examination.

On condition of anonymity, an official of the Bangladesh Petroleum Corporation (BPC) said the importers are bringing adulterated and low-quality bitumen to the country without the approval of BSTI and BUET. Unscrupulous traders and contractors are releasing bitumen from Chattogram port without quality testing through BSTI, BPC or BUET.

An investigation has uncovered more sensational information about irregularities and frauds of bitumen importers and contractors.

Contractors are strategically increasing the amount of bitumen by mixing a chemical called gilsonite. Although the dishonest syndicate including the contractors is benefiting, the government and the common people are deceived. Because the gilsonite chemical mixes with bitumen, the bonding capacity of bitumen (concrete holding of bitumen) decreases.

Due to the thinness of the quality and low bonding capacity, the roads using such low quality bitumen tend to melt waves in summer. Numerous small and big holes are created. Besides, due to the loss of bitumen during rains, water accumulates in these parts of the road and is quickly destroyed and ditches are created.

According to the scientific method, the ideal temperature for heating bitumen is a maximum of 150 to 180 degrees Celsius. In this case, there is no system to measure the temperature.

It can be seen on the ground that in the open drum, bitumen is being melted using old technology. As a result of the use of this bitumen, the roads get a service life of roughly one year or less.

He said “We are taking bitumen from a ship that has been floating in the sea for 3-4 months. In which ship sludge, engine oil etc. are being mixed. The bitumen, which is made illegally or illegally, is arriving in Bangladesh. Basically, we are using garbage in our streets thinking it is bitumen.”

He also said without the approval of BSTI, BPC and BUET, these low-quality bitumen, which is imported through fraud, are being used in road construction across the country. As a result, the roads do not last for long.

Seeking anonymity, a director of BPC said, “Adulterated bitumen is released from ports without permission of BSTI, BUET and BPC. The illegal act is being done by managing an influential syndicate at the ports. The low- quality bitumen is being used on the road constructions. The government should take stern action against this.”

On July 27, 2015, the Road Transport and Bridges Ministry has directed to use 60-70 grade bitumen on road construction.

But the bitumen importers are paying no heed to the directive of the ministry.

On February 28 of the current year, the Local Government and Engineering Department directed the authorities concerned to stop the use of imported bitumen for the construction of roads and highways.

A letter signed by Abdur Rashid Khan, chief engineer of the department, was issued in this regard. The letter says, “The use of standard bitumen is very important for sustainable development of roads and highways.”

The bitumen of Eastern Refinery Limited, the sole country-owned oil refinery, is good in quality while the imported bitumen is very low quality, which must be stopped, the letter says.

The letter states, “Besides, a private company is producing quality bitumen in the country, which can be also used.”

Paying no heed to the directives of the authorities concerned, managing the officers concerned, the contractors are using low-quality and adulterated bitumen to construct roads and highways, which is causing waste of public money and the dilapidated conditions of those within a short time.