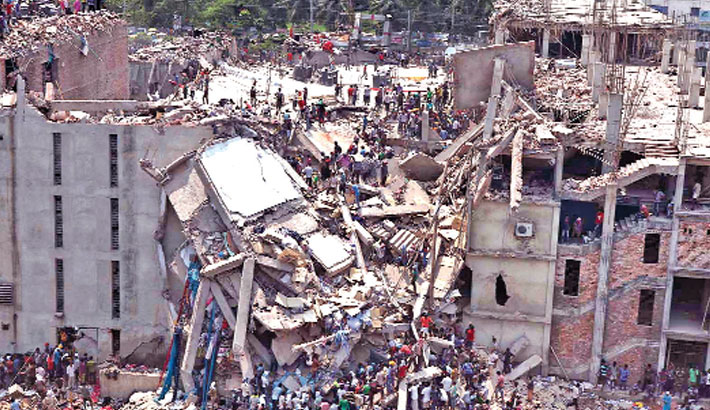 Eight years have elapsed since the tragic Rana Plaza building collapse, but there is no major progress in the proceedings of the two cases filed over the country’s deadliest industrial disaster.

The wait for justice is not going to be over anytime soon, as the trial in one of the two cases filed on charges of killing of more than 1,100 people has not begun yet.

Another case filed on charges of the violation of building codes in the construction of the nine-storey Rana Plaza is facing a similar fate.

The shoddily constructed commercial building came crashing down on the morning of April 24, 2013, leaving 1,138 people dead at Savar on the outskirts of the capital.

Talking to the Daily Sun, Joly Talukder, general secretary of Garment Workers Trade Union Centre, has expressed disappointment over the slow pace of the trial in the cases.

Mentioning that there is no justice in the killing of labour in the country, she said, “The responsible persons behind the Tazreen factory fire and Rana plaza incident are yet to be punished even after many years have passed.”

The trial in the cases stuck with the courts due to negligence of the prosecution lawyers and silence from the state over the incidents, she added.

According to the sources, in June 2015, Criminal Investigation Department (CID) submitted two separate charge sheets -- one for murder and the other for building code violation against 42 accused, including building owner Sohel Rana.

Sohel Rana, his parents -- Abdul Khaleque and Morjina Begum -- and 34 others were charged with causing the death of the workers while four others were accused of sheltering Rana and helping him flee.

In 2016, two separate Dhaka courts framed charges against 42 accused, including Sohel Rana and his parents, in two cases. Following the charge framing, the trial was supposed to begin on September 18, 2016 but the trial is yet to be begun in the cases.

None of the 594 prosecution witnesses was examined yet before the Dhaka District and Sessions Judge Court even after around five years of the indictment due to the legal barrier in any of the two cases.

Court sources said the trial in the cases filed over the Rana Plaza tragedy stuck with two Dhaka courts for around the last five years due to High Court stay orders in connection with the cases.

Of the 41 accused, only Sohel Rana is now in jail while 31 are on bail and enjoying free life. Six other accused are still on the run and three died in the meantime.

The defence lawyer blamed prosecution for the slow trial proceedings in the cases.

As the charges were framed against all the accused on July 18, 2016, the Dhaka District and Sessions Judge’s Court asked the complainant and several other witnesses to appear before it to testify in the case filed over murder charges.

But after the indictment order on July 18 in 2016, eight accused, including then Savar municipality mayor Refayet Ullah and councillor Mohammad Ali Khan, filed writ petitions with the high court challenging the indictment.

Following the petitions, the HC stayed all the proceedings of the case that year. Later, Dhaka District Public Prosecutor wrote to the Attorney General office to have the stay orders vacated.

Later, the HC vacated the orders for six of the accused. But the stay orders for Refayet and Mohammad Ali imposed on May 9 and December 12 in 2018 were yet to be vacated.

When asked about the stay orders, Attorney General AM Amin Uddin on Friday said, “We will take necessary move regarding the Rana plaza cases after the ongoing pandemic situation improves.”

In reply to a question, the top state lawyer said, “We also want quick completion of the cases because many people killed in the deadliest industrial disaster.”

Meanwhile on July 18 in 2016, the Dhaka Additional Chief Judicial Magistrate Court framed charges against 18 accused, including Sohel Rana, in the case filed for violation of building codes.

But the court is yet to start recording deposition in the case as some accused submitted revision petitions challenging indictment against them in the case.

On June 3, 2018, a Dhaka court acquitted a factory owner, Aminul Islam, after the disposal of his revision petition. But the court could not start recording deposition as the revision filed by other accused is still pending.

The trial in the case stuck with the court as a few revision cases are still pending with the higher court in the case, said Anwarul Kabir Babul, additional public prosecutor of the court.

According to a survey done by ActionAid Bangladesh, around 57 percent of the survivors of the Rana Plaza building collapse have remained unemployed during the ongoing the pandemic.

The survey published on Thursday said the physical and mental states of Rana Plaza survivors have not improved significantly and their overall quality of life has not enhanced much in the last eight years.

The conditions of the survivors instead have become more miserable as the majority of them have been jobless while the income of most of the employed survivors has decreased drastically due to the Covid-19 induced economic fallout.

Around 92 percent of them did not get any support from the government during the pandemic but some of the respondents received food and health and hygiene material support from local-level groups and individuals, said the survey.

Of the employed survivors, 43 percent of them are engaged in various types of wages and self-employment where the household income of 37.5 percent is between Tk 5,001 and Tk 10,300. The majority of survivors have an average expenditure of over TK 10,000.

The physical conditions of 14 percent of the survivor are worsening and they have reported that they are still bearing with headaches, pain in arms, legs and their backs, said the survey.

It also said many survivors could not return to work due to physical and mental health conditions.