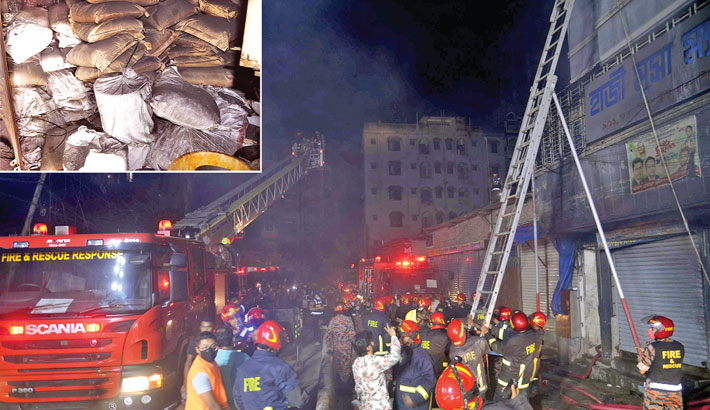 Four people are killed in a fire at a chemical warehouse at Armanitola in Old Dhaka on Friday. (Inset) chemicals stored at the warehouse. – SUN PHOTO

A probe committee formed after 124 people were killed and scores injured in a fire at a chemical store at Nimtoli on June 3, 2010 recommended relocating the chemical warehouses from the congested area.

However, those continue to operate there as the Chemical Industrial Park Sirajdikhan upazila of Munshiganj district to accommodate all chemical warehouses and factories are yet to come into operation.

In the latest incident, four people were killed and 30 others, including three firefighters, injured in a devastating fire at a chemical warehouse in a residential building at Armanitola in old part of the capital early Friday.

Two of the deceased were identified as Suraiya Akhter, 22, a student of Eden Mohila College, and building’s caretaker Walilullah.

Suraiya used to live with her family on the 3rd floor of the six-storey building.

Brig Gen Md Sazzad Hussain, director general of Bangladesh Fire Service and Civil Defence, said the fire broke out at the chemical warehouse on the ground floor of ‘Hazi Musa Mansion’ around 3:15am.

The fire soon spread to other portions of the building.

On information, 18 firefighting units from different fire stations in Dhaka rushed in and took part in the operation.

After about three hours of frantic efforts, they managed to douse the flame around 6:15am.

Fire service officials said they rescued around 15 residents of the building, including children and a pregnant woman.

Locals and volunteers also managed to get several people out of the building through broken windows of different floors.

The injured were first taken to Sir Salimullah Medical College and Mitford Hospital where Suraiya was declared dead by doctors. Most of them fell ill after inhaling smoke.

The reason behind the fire can be determined after investigation, fire officials said.