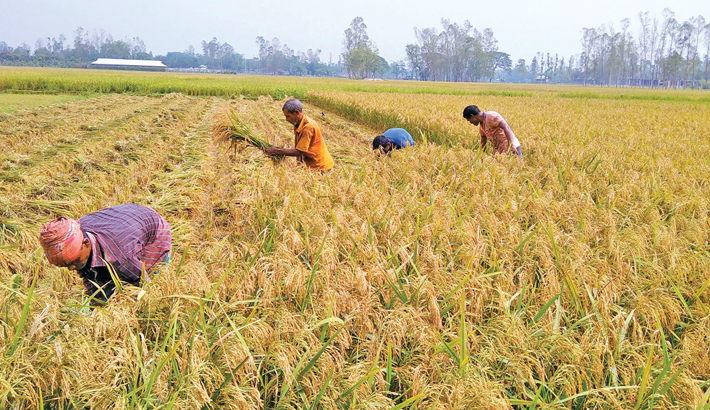 The Boro harvesting has started in full swing across the country. In the photo taken from Dhanghora in Sadar upazila of Gaibandha district on Thursday, farmers were seen busy harvesting paddy in a field. —sun photo

Farmers in the haor, adjacent regions and elsewhere of the country may face losses as the nor'wester, heat shock and rainfall have hit boro farming at the middle of the harvesting time.

The vast lowlands in seven haor and adjacent regions are a major source of rice for the entire country as it comes earlier.

Farmers are worried whether they will be able to harvest their crop timely as they face labour problem and potentially adverse weather conditions along with nor’wester.

He also urged everyone to come forward for harvesting Boro paddy before any natural calamity.

The minister said this year boro has been cultivated on more than 1.20 lakh hectors of land which could help increase boro production by 9-10 lakh tonnes.

Boro has been cultivated on 9, 46,534 hectares of land in seven Haor districts –Kishorganj, Netrokona, Sunamganj, Moulvibazar, Sylhet, Habiganj and Brahmanbaria, according to the Department of Agriculture Extension (DAE).

DAE Field Service Wing director AKM Monirul Alam told the Daily Sun that harvesting of boro paddy will be completed in Haor area within April 30 and across the country within next month.

Different nor’wester and heat shock have affected standing boro paddy over 68,123 hectares of land. The heat shock destroyed rice grown on 21,292 hectares and damaged production on many more hectares.

A Department of Agricultural Extension estimate said more than 300,000 farmers in 36 districts lost their production to the heat shock.

Farmer’s are now in trouble as the prevailing drought conditions are causing significant damage to standing crops including extra irrigation expenditure due a lack of normal rainfall that also pushed the production cost up.

More nor’wester and rainfall may have occurred in the rest of the days of April that may also affect the standing boro paddy.

Boro farmers' dreams have also been shattered by the blast disease in their paddy fields at Manirampur upazila of the district.

Many farmers have lost their way due to blast disease in the field just before the ripening of paddy.  Maximum farmers have been affected by cultivating BRI-28 and Miniket rice. Their dream of a good harvest has faded away.

Bangladesh Krishol League harvested paddy of a farmer Mohammad Jalal at Uttar Ganeshpur of Karimganj in Kishorganj on Wednesday and they will be harvesting paddy across the country.

“A total 3.5 per cent of boro harvesting out of 48, 38,500 hectors of land has already been completed across the country till Friday. Boro harvesting is continuing in all five haor districts, Agailjhara upazila in Barishal District and some part of Jashore District,” said the DAE official.

Boro paddy is ready to be harvested all across Bangladesh as Boisakh (Bengali month) approaches, but it is now under threat due to the coronavirus pandemic. Harvesting of the boro paddy will be completed within the next month.

Boro accounts for more than 50 per cent of the country's total rice production while Aush less than 10 per cent, according to Bangladesh Bureau of Statistics (BBS) data.

Although the agricultural ministry is making special arrangements for the transportation of labourers from different districts to the country's granaries, labour leaders are unwilling to leave home fearing coronavirus infection.